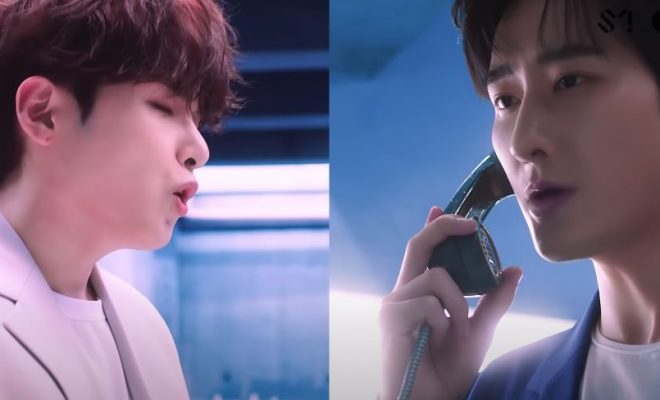 Zhoumi and Ryeowook enjoys the ‘Starry Night’ in MV

Zhoumi has returned with ‘Starry Night‘ featuring Ryeowook. He has released a Korean and Chinese version. Check it out below!

In the Korean version, we are hit with Ryeowook‘s soothing voice. He sings ever so softly with the melody before he lets us voice to build along with the song. One can’t help but get chills while he sings. It is just so soothing and melodic to listen to. Then, Zhoumi comes in with his calming singing style, which contrasts nicely with Ryeowook‘s vocals. He too sounds so beautiful on top of this melody. One can’t help but fall deep in love with this song. The video is also kept simple, which gives us to focus fully on this song.

For the Chinese version, we get a different concept for the MV. This time, they have embraced the colour blue. However, it is still quite simple, allowing us to focus on the beauty of the song. There is also a difference in this version. In particular, it is Zhoumi who starts the song, as he puts his all in singing the high notes while pouring his emotions into the song. This contrasts nicely with Ryeowook‘s vocals, which is very soothing and soft. Overall, one can’t help but love both versions of the song.

Meanwhile, be sure to check out both versions above. Did you like both versions? Let us know in the comments below!