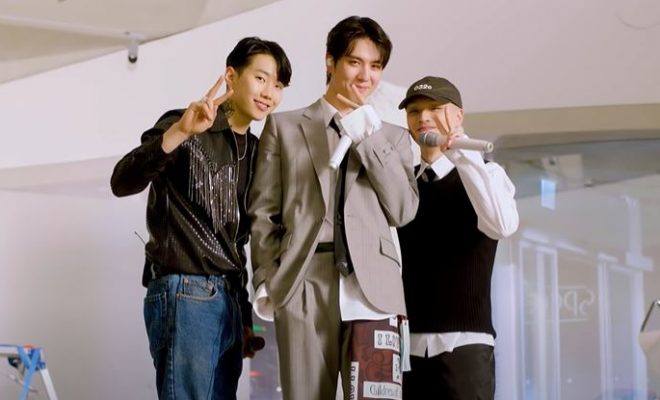 Yugyeom spoils us with different MVs for his b-side tracks

Yugyeom surely knows how to keep his fans on their toes as he releases many official visualisers for his b-side tracks on his latest album, ‘Point Of View: U‘. So, check them all out below!

He first spoils fans with the live video for the track, ‘Love The Way‘ featuring Jay Park and punchnello. The video features all three artists singing live. They focused their attention on the camera that is continuously moving and zooming. The overall setting is simple in white but with a splash of colours here and there, giving it its complexity. It is clear just how much they are able to vibe with one another, giving us something to smile to. This surely has our hearts melting to see how well Yugyeom has settled in AOMG.

The first visualiser is for the track, ‘Running Through The Rain‘. It features water warps on top of an image of Yugyeom chilling by the rocks near the ocean. The way the video is edited makes it feel like Yugyeom is underwater since there are continuous bubbles that are travelling up to the top of the video near his hands. The song itself is just so soothing to listen to as he brings the best of his vocals to this song. The vocals are on point and surely leaves us chilling along to the beat.

The next visualiser is for ‘All About U‘ featuring Loco. This video features Yugyeom leaning against a block that is leaking out this aluminium-like liquid. It is quite a fascinating loop that leaves us captivated. The song itself is another fun and groovy song that goes well with his voice. This is the type of music that fits him well.

‘Falling In Love‘ is the next visualiser. This video doesn’t feature Yugyeom but rather an aesthetic visual. It is a loop of moving objects with tilted angles. The visual itself features many arms and ribbons that move quite well with the vibe of this song. This song is much more soothing and slow in comparison to the other tracks. This allows us to enjoy his beautiful vocals.

‘When U Fall‘ is the last visualiser. This video features many different black and white angles of Yugyeom. He is seen sitting on the chair with great charisma. The camera itself continues to give us close-ups and far shots of him as the lighting moves in and out. The song itself is just so beautiful to listen to with such an addictive beat and rhythm. It is also quite minimalistic, allowing us to enjoy the beauty of his vocals.

Meanwhile, be sure to check out his MVs above. Which track did you like? Let us know in the comments below!