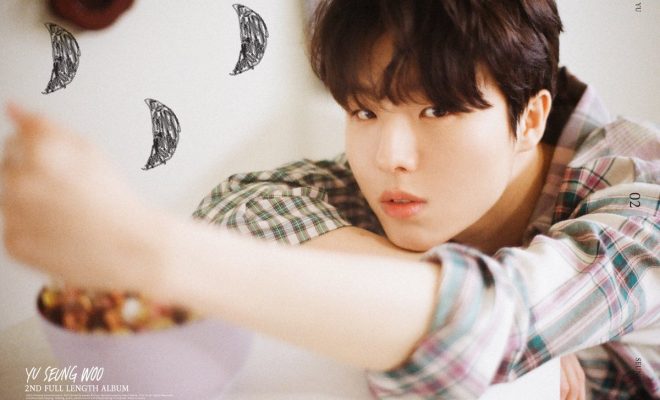 Yoo Seungwoo captures you with his charms in latest concept teasers

Yoo Seungwoo is getting ready to make his hot return with his second full album. So, check out all the teasers below!

In his first concept teasers, it feature what we will see in the daytime. In particular, it appears that he just have woken up by his sleep. He looks all refreshed for the morning, looking like a gem in the morning.

His second concept teasers appear to show the time where he eats lunch or breakfast. Thus, he is not yet fully awake for the morning yet he is up to have some food. He looks great in that shirt and surely knows how to look refreshed for the day.

The third concept teasers, he looks bored since he look like he will be studying in the afternoon. He also looks quite frustrated to be in a room full of books flying around. It even looks like he had tried to transfer the knowledge by placing it on top of his head. It definitely is a cute gesture!

The next concept teasers is of the evening. By this time, he is keen to spend this time with someone special. In particular, out of focus appears to be a bunch of flowers while he is waiting on someone. He looks much more serious than the rest of the others.

The final set of teasers is known as his special photos. The reason why it is special is the fact that he is finally showing off the beauty of his smile. He also seems to act quite silly, which is definitely not presented in any of the other images. It is definitely images that fans will cherish!

He has also gone to drop the MV teaser for ‘Still Here‘. In this video teaser, it features the night, which definitely is different to what we have seen in his image teasers. It definitely is a contrast, giving it that aesthetics. It is quite beautiful how colour just pops out and captures our attention.

Meanwhile, Yoo Seungwoo will make his return on May 8th. What do you think of the song so far? Let us know in the comments below!