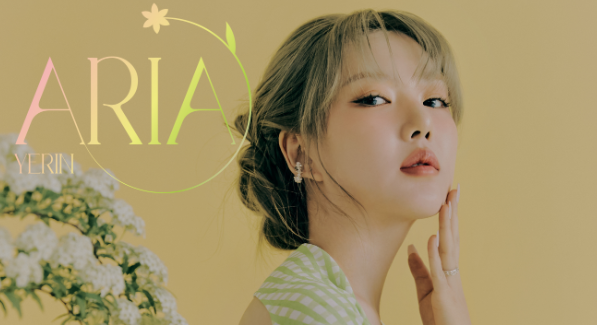 Yerin has finally begun teasing for her upcoming solo debut with ‘Aria‘. Check it out below!

Her first teaser is the objet teaser, which gives us a hint on the kind of concept that she will be debuting with. The teaser itself begins with a beautiful bright gradient that changes to a dark gradient that resembles the night sky.

From her debut schedule, she will release the tracklist on May 5th. The concept teasers are set from May 6th to 12th. The mood film teaser will be dropped on May 10th and 13th. Finally, the highlight medley and MV teaser will be revealed on May 16th and 17th.

The tracklist reveals that this album will have a total of five tracks including the intro track, ‘Aria‘, ‘Believer‘, ‘Lalala‘ and ‘Time‘.

For her first concept teaser, she embraces the beautiful light gradient colours that were featured in her objet teaser. This colour scheme works well with her as she radiates in the colour green. This kind of concept works well with the current season as she shows the best of Spring.

Meanwhile, she is set to debut on May 18th. Are you enjoying the teasers so far? Let us know in the comments below!