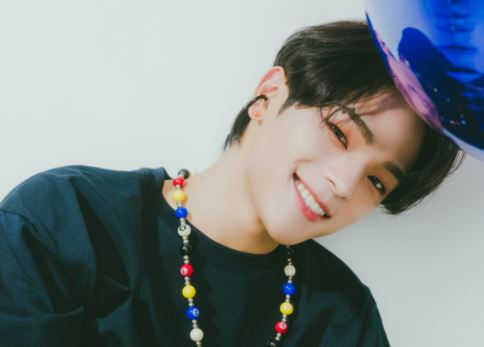 Woojin continues to tease for his upcoming solo debut. Check out his latest teasers below!

His second concept teaser features him in a dark uniform with a matching hat. To enhance this look, he has added gold chains. This helps make the image unique and shiny. He also knows how to look charismatic for the camera, giving us this dark look and concept.

His third concept teaser continues on with this dark concept. This time, he isn’t wearing the hat, allowing us to see his blonde hair. This blonde hair contrasts nicely with his overall dark outfit and makeup. It is definitely a look on him that fans can appreciate.

The first audio teaser is for the track, ‘My Growing Pains‘. The teaser brings us this chilling song that allows us vocals to shine. He has such a soothing voice that travels nicely with this beat. It already sounds quite emotional. We can’t wait to hear more of it.

The second audio teaser is for ‘In My Space‘. This song has a soft and slow melody that features the piano. This allows us to admire how well his voice fits in with this type of melody.

His third audio teaser is for ‘Purple Sky‘. This song is another soothing song that leaves us mesmerised. It has this beat that surely captures us. It surely leaves us wanting more.

He has revealed the full tracklist. There is a total of six tracks including ‘Intro: Alea iacta est.‘, ‘Ready Now‘, ‘My Growing Pains‘, ‘Still Dream‘, ‘In My Space‘ and ‘Purple Sky‘.

His version A concept teaser features him with black hair. His hair colour contrasts nicely with his white shirt and blue background. It is a colour scheme that fits him well. It is also different to what we have previously seen from him.

His version B concept teaser continues with his dark hair colour. This time, it looks like he is embracing that party vibe with the use of neon-like colours. It brings out his bad boy vibes as he stares right into the camera.

His latest concept teaser brings another concept and style. This time, we see him smiling, which brights up the image. It also has this light-hearted feeling to it, which fits well with summer.

Finally, he has revealed the MV teaser for ‘Ready Now‘. From the video teaser, it starts off with his amazing vocals that leave us yearning for more. It is a great section to showcase his voice, as well as give us a sense of what kind of song he will drop.

Meanwhile, he will make his official solo debut on August 5th. What do you think of the song so far? Let us know in the comments below!