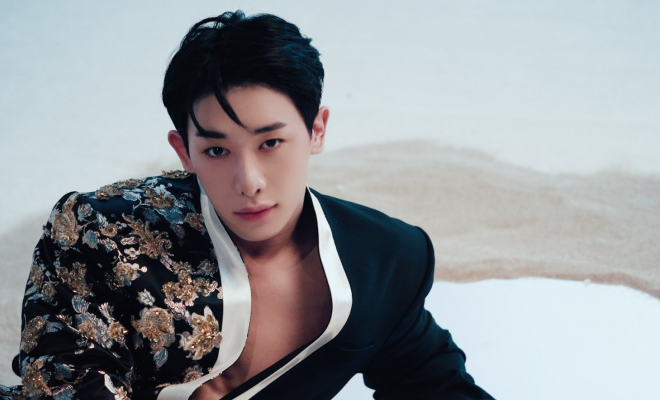 Wonho has begun dropping teasers for his upcoming return with ‘FACADE‘. So, check it out below!

From the tracklist, there is a total of five tracks including the intro track, ‘Crazy‘, Close‘, ‘White Miracle‘ and the outro track.

For his first concept teaser, we get five shot images in one. It is in black and white to help intensify this mature and sexy vibe that he is going for. Each shot focus on one main element of him, allowing us to appreciate every side of him.

For his first official concept teaser, he has gone for that traditional look. He is seen wearing a beautiful outfit that suits his body. We also get to see him aiming to shoot an arrow. He definitely knows how to go for that intense look. This kind of concept suits him well.

In his first concept film teaser, we get to see more of him in this traditional outfit. the camera does a great job in captivating us with its intensity. Every shot is made to enhance this vibe that he is going for. He surely knows how to get fans’ heart racing. It is a concept that he has nailed.

In his second secret teaser, we see the beautiful contrast of white and red. It sets the tone of the image. He knows how to capture us with the way he stares at the camera.

For his second concept teaser, he maintains the dark vibe where he shows off how well he is able to pull off that charismatic and fierce look. This kind of sexy look is something that he pulls off so well. It definitely builds up the hype for his return.

Meanwhile, he will return on June 13th. Are you enjoying the first teasers so far? Let us know in the comments below!