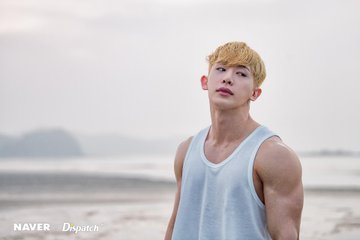 Wonho drops his tracklist for ‘Love Synonym: Right For Me’

Wonho prepares for his solo debut with many teasers. Check them out below!

His first concept teaser showcases his beautiful blonde hair as he is seen wearing a lovely white shirt. He lets some buttons lose as he showcases his confident poses. This kind of mellow effect definitely goes well with his facial expressions.

His second concept teaser shows off the scenery he is at. He is seen posing nicely by the beach. He looks amazing in this kind of setting. His colour hair also matches well with this overall look.

In his third concept teaser, he changes up the mood of the image. He has gone for a darker vibe as he poses during the sunset. He wears much darker outfits, which fits in well with the overall concept.

His final concept teaser has that more fun and chill look. He is seen posing mostly in doors as he lets his cute boy look come through. He definitely knows how to fit into every concept that is given to him.

He has also dropped the MV teaser for ‘Open Mind‘. This track has a more chill and fun vibe to it that leaves us grooving along to the vibe. This will definitely fit in well with his vocals. One also can’t help but enjoy his confidence as he lets loose all his buttons and allowing himself to showcase every side of him.

Meanwhile, he will make his hot debut on September 4th. What do you think of the concept so far? Let us know in the comments below!