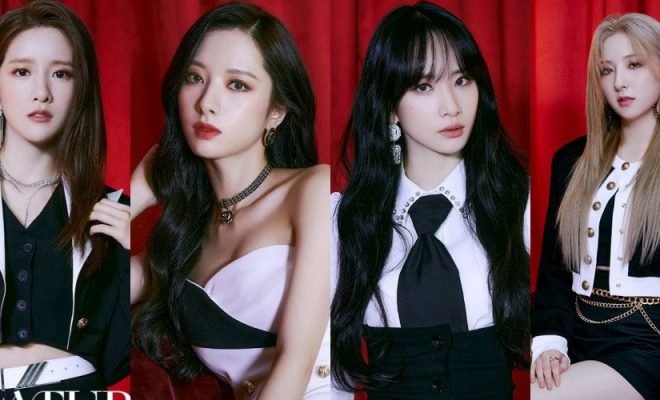 WJSN The Black begins their subunit debut with the debut schedule

Yes, that is right! WJSN will be launching a new subunit called WJSN The Black. They have begun teasing for their debut. So, check it out below!

They have revealed the first teaser. This image reveals who will be part of this subunit. From the image, it reveals that member Seola, Exy, Bona and Eunseo will be in this subunit.

To get fans excited, they have also dropped the debut schedule. It is revealed that the tracklist and mood teaser is dropped on May 1st and 6th. The concept teasers are set from May 2nd to 5th. The spot teaser and MV teaser will be revealed on May 7th and 9th. Finally, the album preview will be released on May 10th.

They have dropped the tracklist. This album will have a total of two tracks including ‘Easy‘ and ‘Kiss Your Lips‘.

They have released the first concept teaser. Looking at the concept, it is clear that it has a different vibe to what we have seen from the members. It has a dark tone to it, which is different to their group and the other subunit’s vibe. It is definitely something that we are all excited to see! All the members in this subunit will definitely pull off this vibe well! We can’t wait to see what kind of song they will release.

Meanwhile, they will make their hot debut with ‘My Attitude‘ on May 12th. Are you excited? Let us know in the comments below!