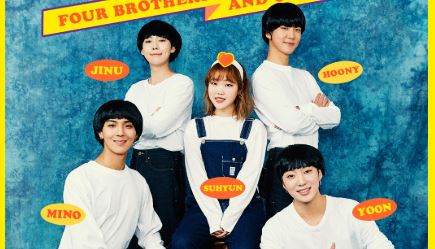 WINNER to make their hot return with ‘Remember’

Yes, that is right! WINNER will be making their hot return soon. Check out the details below!

In the first image teaser, it looks like they will be releasing a pre-release single ahead of their return. The song will be called ‘Hold‘. The image itself looks like a cute family photo as they wear matching outfits while smiling for the camera.

This comeback is actually going to be the release of their third full album called ‘Remember‘. This album is said to have a total of 12 tracks! The image itself features another soft image of the members chilling on the ground.

In the MV concept poster, we get to see that family photo coming to life. It says that the image consists of four brothers and one sister. The image features AKMU‘s Suhyun. She looks adorable sitting in the middle. It appears that she may be appearing in the MV!

Next is the credit poster, whih gives us information on the track. It is said that the lyrics are written by Mino. It is composed by Mino and R.Tee. The track is arranged by R.Tee.

They have also released the motion teaser. The video features a homey video that makes one feel comfortable. One can’t wait to see what the track sounds like.

They have also dropped a finger dance teaser. It looks like it will be a TikTok challenge for the fans. We see Mino doing really well with his fingers as he moves it to the mood of the song. He makes it quite easy and fun!

Next up is the highlight teaser. It gives us a preview of the song. So far, it has this fun vibe that has you moving along to the mood. It definitely puts us all in a good mood!

The next teaser is the second finger dance teaser. This time, it features Mino and Jinwoo doing the dance together. By the way the video is featured, it looks like the MV will also feature this finger dance.

The official MV teaser is dropped, which shows off the cute family interaction. This kind of vibe definitely goes well with the chill vibe of the song. It leaves us smiling to the end.

Meanwhile, they will drop ‘Hold‘ on March 26th with the album dropped on April 9th. Are you ready for this drop? Let us know in the comments below!