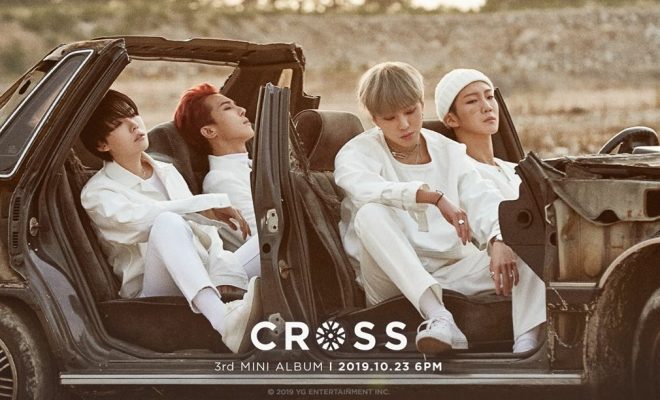 WINNER are charming in teasers for ‘CROSS’

WINNER have been busily dropping all sorts of teasers in the lead-up to the release of their third mini-album ‘CROSS‘.

The album and the title track ‘SOSO‘ are scheduled for release on October 23.

In the latest teaser clip to be released, each of the members is asked to tell the audience what they thin the meaning of ‘CROSS‘ is.

In the second black and white concept teaser that was released, the members come in and out of the shot with their movements in slow motion creating a somewhat serious but sensual and sexy feel.

Earlier a poster for the title track ‘SOSO‘ was released. The image is somewhat pensive, however, we love the visual!

The group dropped the track listing for their upcoming album earlier this week. It revealed that the album will contain six songs, including the title song “SOSO“, “OMG“, “Dress Up“, Lee Seung Hoon‘s solo track “Flamenco“, Kang Seung Yoon‘s solo track “Wind“, and “Don’t Be Shy“.

It also revealed that all the songs on the album were worked on by Song Min Ho, Kang Seung Yoon, or Lee Seung Hoon.

WINNER will be making their comeback with ‘CROSS‘ on October 23 at 6pm KST.

What do you think of the teasers for WINNER‘s ‘CROSS‘ so far? Are you looking forward to hearing new music from them? Let us know your thoughts in the comments below.

Narelle
← Previous Story DAY6 Wonpil and Young K are next up for teaser images for ‘The Book of Us: Entropy’
Next Story → BTS are going to ‘Make It Right’ all over again with Lauv