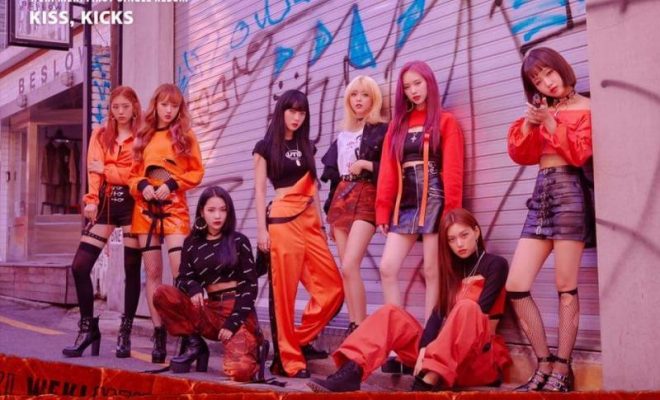 Yes, that is right! It looks like Weki Meki is ready to make another strong comeback with lots of bright and quirky colours. Even though none of the concept teasers are been revealed yet, we can get a feel for the kind of concept they will return with. So, check out all the teasers below!

They had revealed the comeback scheduled in which they have split the scheduled into the two concepts. Under their ‘Lock‘ concept, they will be ‘Locking‘ the school on May 3rd and 4th. They will do a GRWM ‘Lock‘ on May 8th. Following is is their LOL concept in which they have a few things prepared on May 6th, 7th and 8th. There is also the album preview on May 6th. Following on is their two teasers set for May 10th and 13th. The last teaser is their student record, which will be revealed on May 12th.

The album packaging details has also been revealed. There is a photo book, CD-R, stickers and two random selfie photo card. For those who will be getting the first limited edition, you will get an additional poster and a Weki Meki ling.

They have revealed the first tracklist image. It looks like this single will have a total of three songs. The first track is called ‘Picky Picky‘ and will be the title track.

They have gone ahead and revealed their first concept teasers. It is unexpectedly more nature-looking. Going with the overall theme of this comeback, they are seen dressing up in beautiful school outfits while keeping up with their girl crush look. They definitely fit nicely into this concept.

Meanwhile, the group is set to make their hot return with ‘Lock End LOL‘ on May 14th. Are you ready for this? Let us know in the comments below!

Tracey Luu
← Previous Story Ladies’ Code announces their return with an image teaser!
Next Story → NC.A stares right through you in new ‘Some-‘ concept teasers