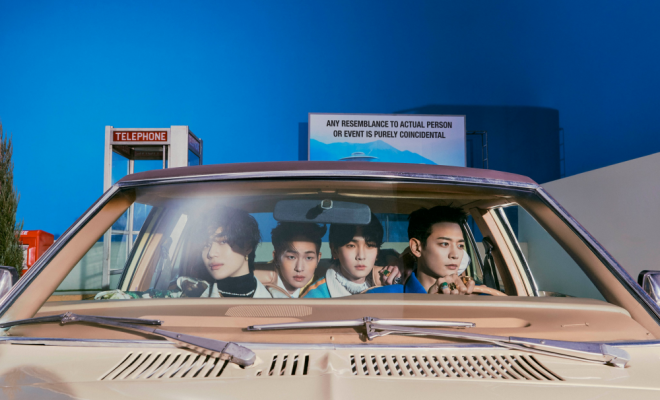 We can’t wait for SHINee’s comeback!

Anticipation around the impending release of ‘Don’t Call Me‘, SHINee‘s seventh album is building. It seems like we’ve been waiting for this moment forever….

SHINee will be making their comeback when ‘Don’t Call Me‘ is released on February 22. The album will contain a total of nine (9) tracks of diverse genres.

The latest teasers to be released are the concept image teasers of Onew and Key. Like the other teasers that we’ve seen so far, these images have a somewhat surreal feel to them. It kinda has the vibe of ‘The Truman Show‘ to us – we could of course be wrong!

SHINee have also shared their ‘Fake Reality‘ mood sampler and group photos. We’re still a bit confused by the concept, but we know the story will be revealed along the way.

The mood sampler is very colourful and has a vibe of Tim Burton about it. (Anyone feeling Edward Scissorhands?) The messages come at us thick and fast; everything from Taemin serenely reading a newspaper on a park bench that is on fire, to Minho carrying around a ringing telephone.

The clip ends with the members huddled together as a message is played that says: “In this area, some of my beliefs become a fantasy. And some of my fantasies become a belief.”

The group had earlier released a teaser schedule so that we know what we have to look forward to until the release on February 22.

The first teaser image to be released following the group’s live broadcast on January 31, was a mysterious black and white teaser image projected using an old-fashioned overhead projector which featured the caption ‘Any resemblance to actual person or event is purely coincidental‘.

SHINee will be making their comeback on February 22 with their seventh album ‘Don’t Call Me‘.

What do you think of the teasers from SHINee so far? Are you looking forward to hearing new material from them? Let us know your thoughts in the comments below.

Narelle
← Previous Story ATEEZ get us excited for their comeback!
Next Story → Kang Daniel gets dark in new ‘Paranoia’ teasers