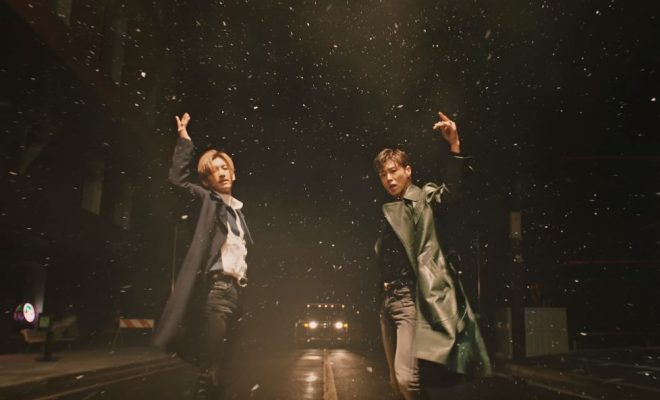 TVXQ reveal the ‘Truth’ in their latest MV

TVXQ have made their comeback to coincide with their 15th debut anniversary and have released ‘New Chapter #2: The Truth of Love‘ and the title track ‘Truth‘.

‘Truth‘ is a smooth and mature R&B pop song that is infused with groovy jazz rhythms. It’s a style that suits the vocal styles of both Changmin and Yunho. It’s also a song that reunites them with Thomas Troelsen who was responsible for their 2009 hit ‘Mirotic‘ (which also happens to be my favourite TVXQ song).

The song kicks off with a funky bass that gets things moving in the right direction, which leads into the smoother than smooth vocals that surround the instrumental with TVXQ‘s undeniable style. The sumptuous layering on the chorus is beautiful and highlights their trademark sound.

The song has an accompanying music video which is sleek and sophisticated and sees the pair switching between reflectively singing amid rain showers and moodily lit sets, and serving up sleek choreography. Dance has always been TVXQ‘s strong point, and with the new music video it’s not just the duo that get into the groove of the song, but even their shadows.

TVXQ‘s ‘New Chapter #2: The Truth of Love‘ was released on December 26 to commemorate the group’s 15th debut anniversary.

What do you think of the song ‘Truth‘ from TVXQ? Do you like the music video? Let us know your thoughts in the comments below.