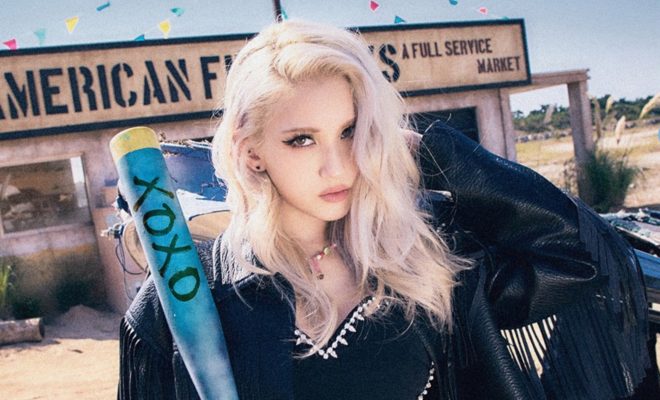 The songs that captured me from SOMI’s first album: ‘XOXO’

It has been a month since the release of SOMI‘s first full album, ‘XOXO‘ and it is definitely an album that I frequently return to listen to. From this article, we will be highlighting the tracks on this album. Listen along with us as we review the 8 tracks on this album!

So, the first track on this album is ‘Dumb Dumb‘. This track is her third title track song, coming off from her debut song, ‘Birthday‘ and her first comeback song, ‘What You Waiting For‘. It is a great follow-up track from ‘What You Waiting For‘. This track is definitely an upbeat song that goes well with her vocals. It also allows her personality to come through, as she plays around with the melody. This track certainly helped build up the hype for the tracks to come!

The next track is the title track, called ‘XOXO‘. This song brings a whole different vibe in comparison to ‘Dumb Dumb‘. It has this chanting melody that sounds quite emotional, especially when listening to the lyrics. This type of rhythm and tune is quite fitting with her voice; especially when she hums along to the song. It surely gives me the chills that I had not expected while listening to this initially. Since it is quite different from her other title tracks, it allows us to see how versatile she can be with her music, which we all love to see. It definitely allows us to anticipate her next comebacks.

‘Don’t Let Me Go‘ featuring Giriboy is her third track. This song starts off with a fun melody before we are stunned with the beat drop and her strong vocals coming through. I love it when she gets to showcase her rap verse, which contrasts nicely with her vocals. This type of rap style suits her so well. Overall, the song is quite catchy with such a great hook.

‘Anymore‘ is unexpected but one of my favourites from this album. This song brings it all down, allowing us to enjoy her pure voice. This lovely guitar melody allows us to sit back and relax as she brings us on a journey with this song. Then, the chorus hits and we are this splash of happiness that lights up our world. Something about this song is just so easy to sing and shout along to. Overall, this song has a groove like no other. It is a song that I have on repeat consistently!

‘Watermelon‘ is the next track on this album. This song is quite laid-back, but still has these beats and rhythm that we could all bop our heads to. The progression of this song is well-made to bring out the best of her vocals. It just sounds so soothing on this beat. The way she rides the beat is just so heavenly to listen to. The song itself is also quite sweet and lovely to listen to. It is another song that really suits her well.

The next two tracks on this album are her debut track and her first comeback track, ‘Birthday‘ and ‘What You Waiting For‘. It is a great way to reflect on her years as a solo artist. It is also a great reminder of her previous releases. This surely shows her growth in music and how much her music has progressed. It surely has us really excited for her future and where her music will go.

Overall, it is a magnificent first full album from Somi. My favourite track from this album has to be ‘Dumb Dumb‘! It is one of my favourite songs of 2021! What was your favourite? Let us know in the comments below!

Tracey Luu
← Previous Story BLACKPINK want to stay ‘In Your Area’ with their Sydney finale!