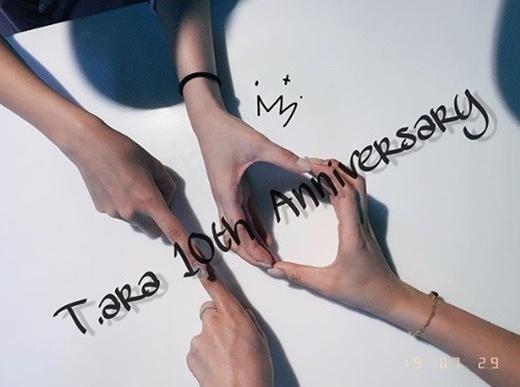 Celebrate 10 years with T-Ara on VLIVE!

Kpop queens T-Ara have revealed they will celebrate their 10 year anniversary with a special broadcast on VLIVE!

T-Ara consists of four talented members – Qri, Eunjung, Hyomin, and Jiyeon. To announce the special news, each member took to their personal Instagram accounts to post a cute picture of the four holding their fingers in the shape of a ’10!’

The image, as seen below, is splashed with the words ‘T-Ara 10th Anniversary‘ and is posted with a caption informing fans that the VLIVE will be held on the 19th of July, at 4PM KST.

T-Ara first debuted back on July 29, 2009. Over the years, they’ve created catchy hits such as ‘Roly Poly’ and ‘Sugar Free.’ While T-Ara has seen several members come and go over the years, the remaining members have shown love and resistance for both their music and their fans.

The band’s contract expired back in December of 2017, and while the four remaining members are currently pursuing individual activities and solo careers, they are still determined to comeback for fans one day.

Although the talented members are currently chasing their personal endeavours, it’s reassuring to know that they love and respect their fans enough to come together for a special VLIVE broadcast! We can’t wait to see what they have planned!

As always, All Access Asia will keep you updated on all the latest!

asiaadmin
← Previous Story 2PM is planning something special for their 11th anniversary!
Next Story → VERIVERY is having a ‘VERI-CHILL’ day in their latest teasers