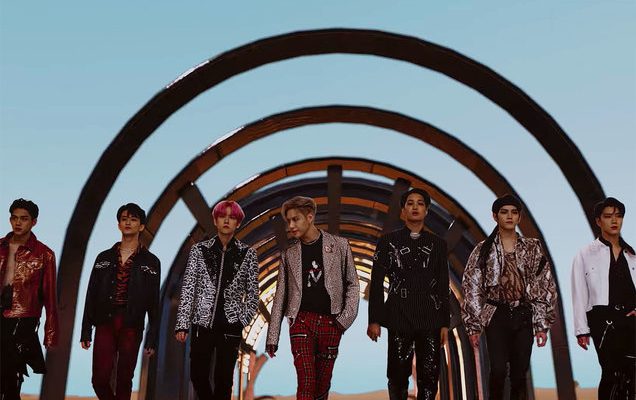 After all the hype and anticipation, SM Entertainment‘s super-group and ‘Avengers of K-pop‘ SuperM have made their debut with the release of their first mini-album ‘SuperM – The First Mini Album‘ and the title track ‘Jopping‘.

In a world where the word super is thrown around easily, this group really is ‘super‘. They are a group made up of members that Taemin has described as the ‘aces of aces’ from their own K-pop groups. (NB. I hate the term boy band/boy group – they are all full-grown men!)

SuperM consists of Baekhyun and Kai from EXO, Mark and Taeyong from NCT, Taemin from SHINee and Lucas and Ten from WayV.

‘Jopping‘ is a combination of ‘jumping’ and ‘popping, in recognition of the group’s intense performance style. The song itself is loud and brash and fun and completely K-pop at its best.

It’s thumping and distorted synths throb underneath the verses and support the anthemic chant that is almost a call to action to fans around the world.

The accompanying MV is grand and cinematic and fits with the power of the track. With so many idols in one clip, it’s hard to know where to focus, but they all hold their own. Special shout-out to Baekhyun for the spectacular high-note mid-song!

SuperM will be performing ‘Jopping‘ and their other tracks live for the first time from Capitol Records in Hollywood on October 6 at 11am KST.

What do you think of ‘Jopping‘ from SuperM? Let us know your thoughts in the comments below.

Narelle
← Previous Story Chen takes us to a romantic world with ‘Shall We?’ MV
Next Story → Jeong Sewoon thinks about you ‘When It Rains’