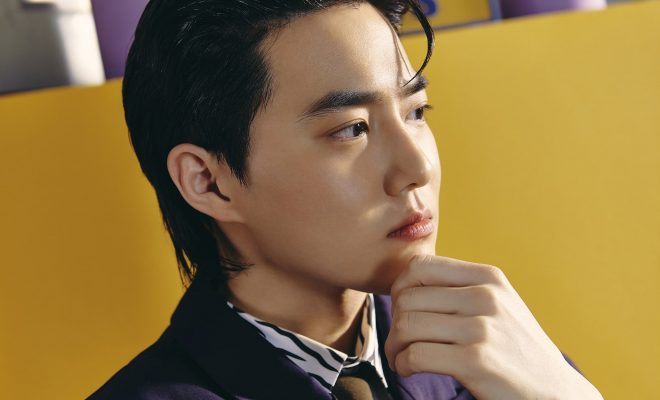 SUHO has made his long awaited solo comeback with the release of ‘Grey Suit‘, the title of his second mini-album and title track. This is also SUHO‘s first release since completing his military service and his second solo release after 2020’s ‘Let’s Love‘.

‘Grey Suit‘ has the same feel as ‘Let’s Love’ in that they both fit within the bounds of the soft rock, ballad genre. It’s a song (and genre) that is a perfect match for SUHO‘s soothing and melodic vocals. His voice is both powerful and refreshing at the same time.

I love that we get to hear him on his own terms, away from EXO. Don’t get me wrong – I love EXO, but it makes me happy to hear their solo releases as well.

The lyrics talk about SUHO experiencing a loss of colours after the love of his life leaves him and how the two worlds were contrasting and he’d rather be with her than experience the colourless world.  The instrumentation of the song, combined with his emotional vocal combine to bring the song to life and you can hear the story behind the words.

The accompanying MV matches the mood and the theme of the song perfectly. It shows the two sides of him – the heartbroken youth who grows into the emotional man. The heartbroken youth who still had colour in his world and lived with hope, as long as she was by his side who turns into the man who lives in a grey world with only memories until the final moments when he breaks free from his past.

Then cam the release of ‘Hurdle‘, with it’s completely different vibe and upbeat tempo, it couldn’t be more different from ‘Grey Suit‘ and we like it.

It’s a funky, fun track that is casual and full of personality. The song’s lyrics talk about a relationship that seems to be stuck with SUHO wanting to know if the couple are a couple. He has feelings for her, but she keeps putting hurdles up. The accompanying MV is as bright and fun as the song itself – and it shows SUHO how we all picture him – perfect boyfriend material.

What did you think of SUHO‘s releases ‘Grey Suit‘ and ‘Hurdle‘? Do you have a favourite between the two? Let us know your thoughts in the comments below.