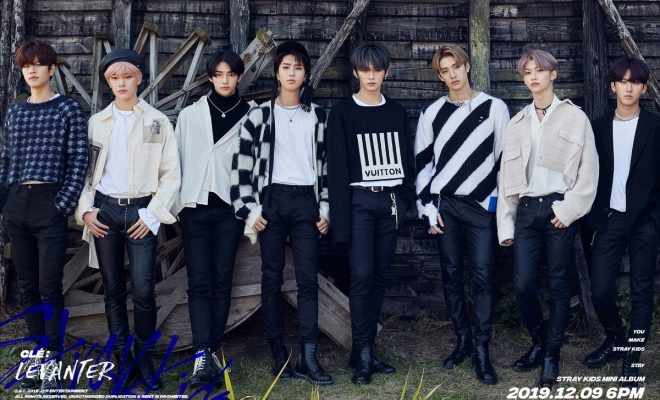 Stray Kids to make their Japanese debut in 2020 + details on upcoming Korean return!

Yes, that is right! Stray Kids has been busy preparing for all kinds of content. They have recently announced they will be making a Japanese debut, as well as drop more teasers for their upcoming ‘Cle: Laventer‘ return. Check it all out below!

Stray Kids will be making their official Japanese debut in March 2020. This album will contain the Japanese versions of their Korean tracks. The album will be called ‘SKZ2020‘.

Following on from their individual teasers, we get their group teaser. Like their concept teaser, we get two images. One of the images goes for that dark look in which has the members dressed in black and white. The other image is much more light-hearted, giving you a feeling of nature.

They have also revealed a mysterious map. Many believes that this map is what connects everything that we have seen from their music videos together. The music videos date back to their ‘Hellevator‘ era and will connect up to their upcoming ‘Levanter‘ era.

They have also released the MV teaser. Through the MV teaser, we get to hear the intense track that goes well with the vibe of the video. Just the audio is enough to have fans quite excited for the full release. The end of the video gives us a preview of the vocals, bringing chills down our spine.

Meanwhile, the group will make their hot return on December 9th. Are you excited? Let us know in the comments below!