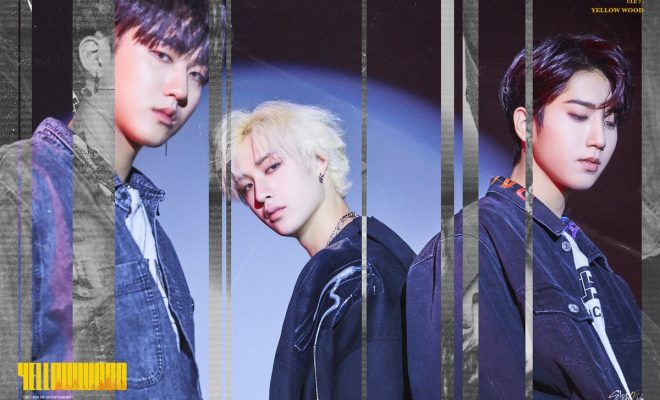 Stray Kids continue to tease for their upcoming return with ‘Yellow Wood‘. This time, they have revealed the unit teasers, as well as a track poster. So, check it out below!

So, the members have teamed up into two groups. The first group contains Han, I.N, Hyunjin, Lee Know and Changbin. It is always so beautiful to see them posing so coolly for the camera, where the lighting helps enhance this stern look they are going for. The refreshing use of colour also helps make the image come to life.

The other group is made up of Seungmin, Felix, Bang Chan and Woojin. Since they are wearing white, it contrasts nicely with the black, yellow and blue lighting. It allows them to stand out and look gorgeous.

The second unit teasers have the members split up into three. The first three is of Hyunjin, Woojin and Felix. The second group contains Lee Know, I.N and Seungmin. While the last trio is our one and only 3RACHA (Bang Chan, Han and Changbin). This effect they have on their images make it look like it is glitched. It is quite interesting and cool to look at!

Meanwhile, they have also revealed this track poster. It looks like they will be revealing the audio teasers from June 14th to June 19th!

They have also dropped a teaser in regard to their CH.SKZ weekly program. The first thing teased is the SKZ Talker which are behind the scene footage of members, followed by the Two Kids Room which has two members in a room talking about random things. Next up is the Sunday Kids, which is a planned concept that has the members together doing something fun! There is a new addition of ChoiSKZ which appears to be a choice between A and B tasks that the members need to do! There is also a mysterious fifth item which is left to fans’ imagination!

They will make their hot return on June 19th. Are you ready? Let us know in the comments below!