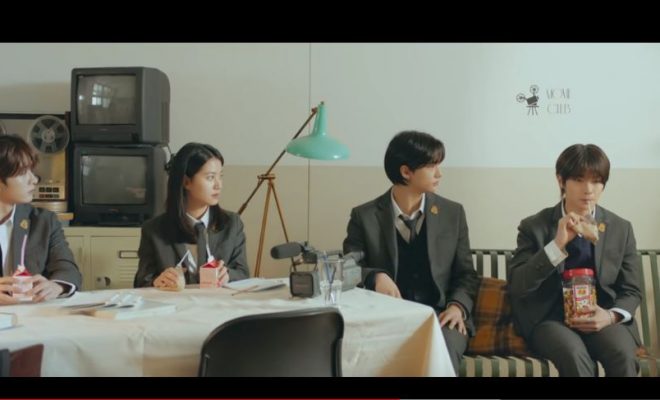 Stray Kids is back ‘On Track’ with ‘TOP’ teaser

Stray Kids is back with a gift for the fans. This is for their second anniversary and it’s a song called ‘On Track‘. On top of this release, they have also dropped their ‘Tower Of God‘ soundtrack teaser. Check it out below!

Just like the image teasers have shown, we get to see Stray Kids’ acting abilities. In particular, this storyline focuses on Lee Know, Hyunjin and I.N. Previously, Hyunjin and I.N have shown their acting abilities in ‘A-Teen 2‘. So, it is nice to see them put forth their abilities in this MV. From my perspectives, the storyline follows a group of friends where some of them begin to like one another. It is somewhat evident that Hyunjin and Lee Know like the main protagonist. As the MV progresses, we begin to notice these jealousy moments before Hyunjin puts his emotions first. This is where the MV ends and leaves us with a “To Be Continued“.

The other members are also seen in the MV, appearing to be filming something altogether since they are all part of the movie club. They work on controlling the lighting, the script and the sound. It is quite interesting to watch. The song itself is just perfect. It is always nice to see them allowing their vocals to shine. They all can sing and it is just a beautiful thing to relax to. They definitely have not disappointed us with this release; rather it left us feeling proud.

Meanwhile, they have also dropped the Japanese soundtrack teaser for ‘Tower Of God‘. The track is called ‘Top‘. What we hear so far is quite intense and definitely has us more excited than ever for its full release. Their vocals just go well with this kind of vibe, giving us this beat to bop to.

It will be released in April. Be sure to check out the MV above. What did you think? Let us know in the comments below!