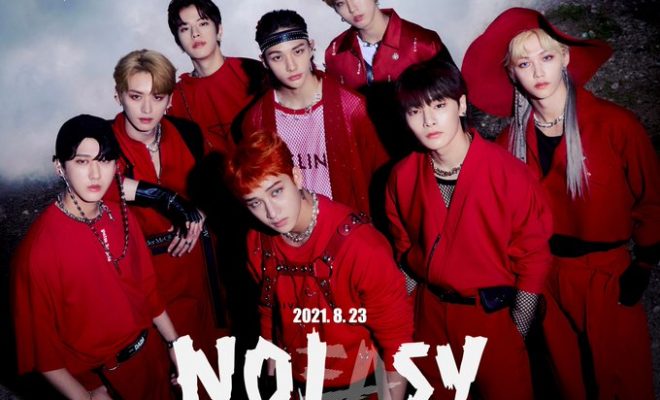 Stray Kids has begun dropping their concept teasers for their upcoming return with ‘NOEASY‘. Check it out below!

Stray Kids are not here to play! Each member gives us such fierce stares that surely pierce through our hearts. They have chosen outfits that enhance this vibe they are going for. Especially with the red outfits, it surely shines against the smokiness and overall lightness in the image. This type of concept is definitely more intense than anything they have released so far. Thus, it will be exciting to see what they will return with.

They have given us a preview of the next track. It is called ‘Obsession‘. For those who don’t know, this track is a unit track that consists of Bang Chan and Hyunjin. It is also a track that is teased through their short show, ‘SKZ Song Camp‘ where they worked in groups to make a unit song. From the teaser, they definitely have gone all out and has given us a sexy concept. The use of black and white, as well as the colour red, has helped enhance this overall vibe they are going for. We can’t wait to see and hear the full thing.

The next unit track they have previewed is called ‘Gone Away‘. It features members Han, Seungmin and I.N. The storyline appears to follow them as students. The song itself is quite an emotional one that showcases the best of their vocals. We can’t help but get chills while listening to them singing those high notes.

They have also dropped the next concept teaser. First off is Bang Chan and Lee Know. Instead of the red, they are now going for that black and white look. They still maintain that fierce and bad boy look. This is definitely a strong concept. We can’t wait to hear the title track.

Meanwhile, they will make their hot return on August 23rd. What do you think of their teasers so far? Let us know in the comments below!