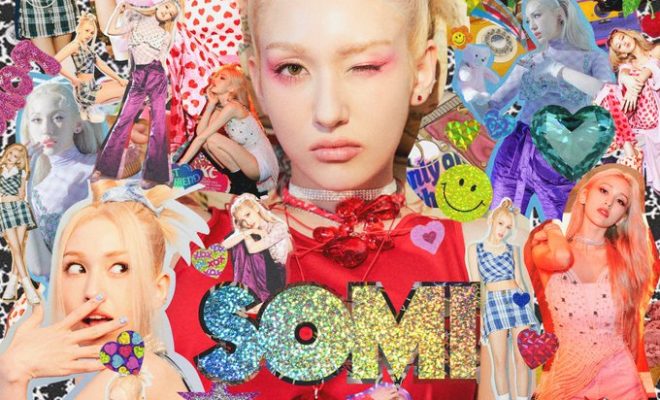 Somi is preparing for her upcoming return with ‘Dumb Dumb‘. Check out the teasers below!

In her first image teaser, it reveals that she will be returning with a new single. Her image teaser definitely gives off his refreshing vibe as she shows off her charisma. She definitely knows how to stare down at the camera. The surrounding gives off this teenager vibes with the colourful stickers pasted around the image.

She continues with this fun concept as we see her wearing different outfits while been placed in different sections of the image. It almost looks like a scrapbook and someone has pasted many Somi images on that page. The outlines around her help enhance this look she is going for.

Her next image teaser is a close-up shot of her with quite an intense stare. It also has a different vibe from her previous teasers. This one embraces the purple and pink colour more, which is more fierce than the mellow and fun vibes of her other teasers.

In her fourth teaser, we go for a more chill vibe as she sticks out her tongue. The white concept allows her eyes to shine as it looks deep into our soul. She looks incredible in white with pearls added near her eyes. While her fifth teaser brings out her charisma. She looks amazing in white with the red lighting behind her. Her pose makes her look super elegant.

Her next image teaser is an upgrade of her second teaser. We see more images of her pasted on the page where it features the outfits she is wearing in her previous teasers. It allows her personality to come through, as well as allowing her charms to shine.

Her seventh and eighth image teaser brings two different concepts. Her seventh tease has her winking at the camera while casually posing. The purple outfit contrasts nicely with the blue outline. The image also embraces the scrapbook vibe, especially since it looks like the book cover. Her eighth image teaser features her embracing the colour red which contrasts nicely with the purple lighting. The red colour goes well with her.

Her next two image teasers feature her in a white dress that fits her nicely. It is interesting to see some black items behind her that contrasts with the overall light concept. The images definitely captured her beauty well.

She has also dropped the MV teaser. It features her walking through the halls of a school, looking quite confident. However, behind the scenes, we do see a darker side to this as she goes through turmoil. The video ends with her beautiful performance on the dance floor.

Meanwhile, she is set to make her hot return on August 2nd. Are you ready for this? Let us know in the comments below!