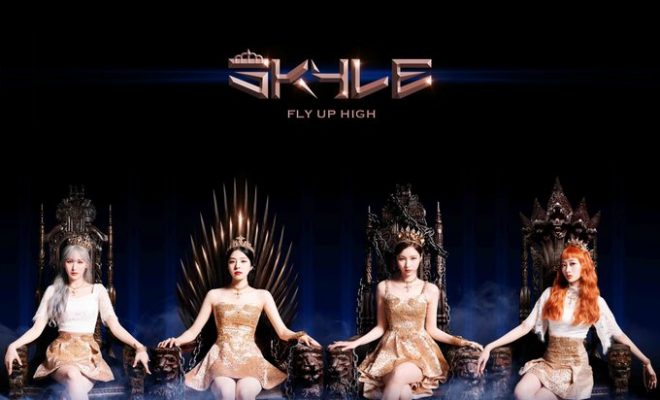 SKYLE continues to tease for their upcoming debut with ‘Fly Up High‘. So, check it out below!

For their second concept teaser, we see the members wearing light golden outfits that contrast nicely with the dark chair and blue curtains. They definitely give off that queen vibe, especially with their golden crown. It surely looks quite elegant and royal.

They have revealed their third concept teaser. They are seen wearing the outfits that were used for their second concept teaser. However, this time they are in a different setting. In fact, their image has this arch border that contrasts well with their white background. Due to the use of gold, it continues to have this elegant vibe to their teasers. We can’t wait to see what kind of song will fit in with this concept.

They have dropped the tracklist. There is a total of four tracks including ‘Fly Up High‘, ‘Da Da Da‘ and their instrumental versions.

To get fans excited, they have given us a preview of their tracks. ‘Fly Up High‘ has such an intense beat and melody that surely has us bopping our heads to it. ‘Da Da Da‘ has such a groovy beat that would leave us dancing to it. It is fitting to their vocals. It definitely has a catchy tune so far!

They have also revealed the MV teaser. It starts off with this eerie sound that builds up to the crumbling of rocks. It ends with them saying their name. So far, it looks quite intense and surely leaves us wanting more!

Meanwhile, they will make their official debut on August 4th. Are you excited? Let us know in the comments below!