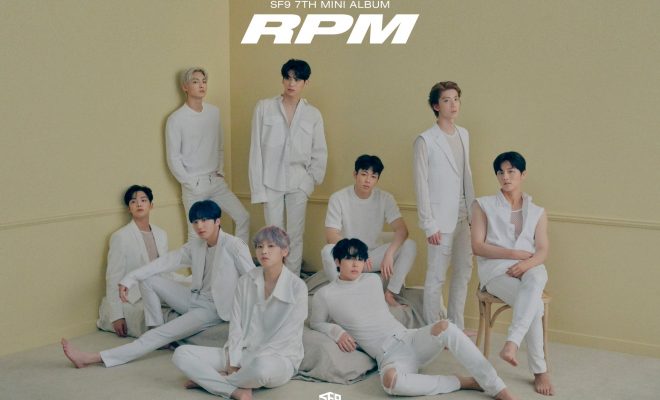 SF9 have got us revving our engines for ‘RPM’

In a surprise for all of us, SF9 will be making their comeback on June 17. The group will be releasing their seventh mini album entitled ‘RPM‘. There will be two versions released ‘Max‘ and ‘Zero‘.

It’s a surprise because it’s only been four months since the release of ‘NARCISSUS‘ in February and we’re still recovering from that!

The concept for this release is quite sophisticated yet masculine and sexy at the same time. The ‘Zero’ concept is fresh, clean and white-toned, while the ‘Max’ concept is a little moody with shades of blue and black.

The most recent teaser image is the ‘Zero’ group jacket poster. It features all the members posed against an off-white wall while dressed in white. It only serves to highlight the ethereal beauty of the members. We see you Hwiyoung -we’re loving the haircut!

The ‘Max‘ teaser has the member posed in a more ‘industrial’ setting dressed in blues and blacks. Chani‘s blue hair is the standout in the shot, but special mention to Inseong who looks like he’s ready to pounce!

The group revealed the schedule of their comeback activities for this release which shows us exactly what we can look forward to between now and the album release date of 17 June.

FNC revealed that they have opened a teaser site for the album release via Twitter.

The first we knew about the comeback, was the release of this teaser image earlier this week. Like everyone else, we lost our minds at this news! We have one question though, whose neck is that tattoo on?

SF9 will be making their comeback with their seventh mini-album ‘RPM‘ on June 17 at 6pm KST.

Are you looking forward to the release of ‘RPM‘ from SF9? What do you think of the concept so far? Let us know your thoughts in the comments below.