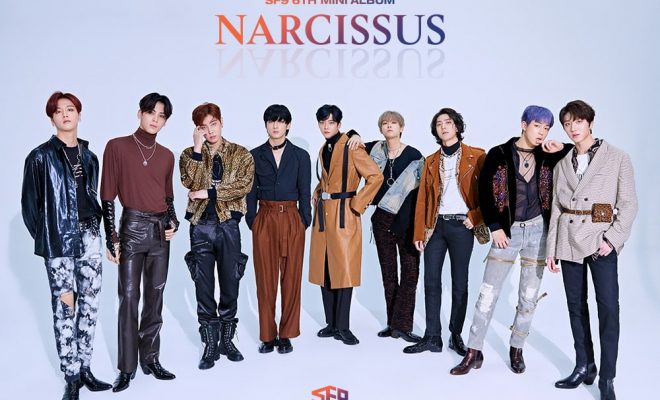 SF9 are as beautiful as Greek Gods in ‘Narcissus’ teasers

This week saw the announcement from SF9 that they will soon be making their comeback with ‘Narcissus‘, their sixth mini-album.

‘Narcissus‘ was a hunter in Greek mythology who was known for his beauty. With the teasers that have been released so far, it seems to be a fitting title for the members of SF9.

So, let’s get you caught up with all the teasers.

The group have been releasing images and visual videos for each of the members.

The latest member to have his jacket poster and visual video released is Rowoon. If these images don’t make Rowoon your bias or your bias-wrecker, well, you get the idea.

Jaeyoon‘s images are continuing on with the theme of the duality of the imagery for ‘Narcissus‘.

Zuho‘s images were released along with the news that he won’t be participating in the comeback due to a back injury.

We’re wishing him a speedy recovery.

Inseong‘s images were released along with his visual video and we were spellbound by his blonde hair. We’re loving this concept for their comeback.

Youngbin was the next member to have his teaser images and visual video released.

Teaser images of Dawon along with a ‘visual video’ were released. The jacket poster images show the duality of the concept with the colour versus the black and white images.

We’re all seriously in love with his purple hair!

The first teaser for ‘Enough‘ was also released this week. We’re going to assume that ‘Enough‘ will be the title track. It sounds like an electro-pop track with plenty of soaring synths.

Some of the first images released were the group images. We got both a colour and a black and white version. Each image shows off the incredible visuals of the group, but each of them have a very different feel. The colour image has an aloofness about it, while the black and white image somehow feels warmer.

We also started to see the first of the individual teasers with Taeyang and Hwiyoung.

The release of SF9′s comeback schedule revealed details of all the teasers that we have to look forward to between now and the album release date.

The teaser site shows pieces of glass floating in water, and the words ‘temptation’ and ’emptiness’ are written on the left and right edges. Once the pieces of glass are put together like a jigsaw puzzle, it reveals a picture of Chani.

SF9‘s sixth mini-album ‘Narcissus‘ is scheduled for release on February 20 at 6PM KST.

What do you think of all the teasers from SF9 so far? Who is your bias in SF9? Are you looking forward to the release of ‘Narcissus‘? Let us know your thoughts in the comments below.