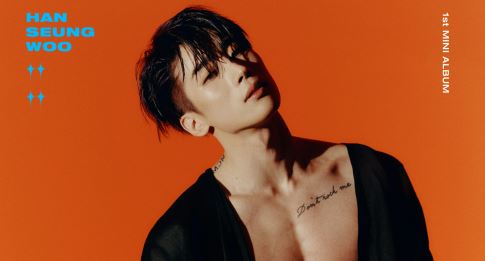 Seungwoo continues to drop his concept teasers. Check it out below!

In his latest concept teaser, he has gone for a sexier vibe as he loosens his shirts. In these teasers, we get to see two distinct tattoos that help define his body. He also has such a good body that is highlighted in these images. The way he stares at the camera definitely melts many fans’ heart. He knows this concept will have fans squealing with excitement.

In his new concept roll, we see him pouring wine into a wine glass. He is also seen wearing a lovely black shirt that goes well with the vibe of the clip.

He has dropped the preview for ‘Forest‘. It is such a soothing song that sounds like a lullaby. His vocals are just so beautiful on top of this melody. One can’t help but fall in love with the way it sounds.

In the preview for ‘Reply‘, we get an upbeat song that gets you grooving along to the pace of the song. Before we get to the drop, the song abruptly ends, leaving us more excited than ever for its release.

‘Sacrifice‘ is such a trendy song to listen to. We get this beat where he rides it like no other. It is quite an interesting track to listen to as we get to hear the verses. It looks like we will get a mix between his rap style and vocal style.

‘Spoiled Site‘ is his more smooth song as he allows his vocals to shine. He sings so beautifully along the melody as he hits the high notes so effortlessly. One can’t help but get chills from listening to him sing.

The next track called ‘Fever‘ has a more of a sexy vibe. One can definitely groove along to it and enjoy the way it sounds. The emotions that he has poured into this track can definitely be felt. One can’t wait to hear the rest of it.

‘Want‘ slows it drop with this fun beat. He lets his voice travel so nicely on top of the melody. We don’t get to hear much of the verses. However, from what we have heard so far, he will definitely allow his voice to go down the R&B lane.

He has also dropped the first MV teaser. We see him in a parking lot surrounded by beautiful cars. The song itself has this beautiful synth sound that goes well with his humming vocals. It ends quite quickly, leaving us wanting more.

Meanwhile, he will make his solo debut on August 10th. Which track caught your attention? Let us know in the comments below!