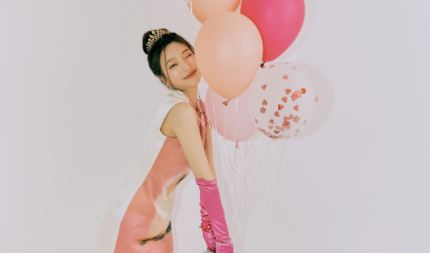 Yes, that is right! Red Velvet‘s Joy has finally dropped her teasers ahead of her solo debut. Check it out below!

As many knows, Joy will be releasing a special solo album which will feature 6 remake tracks from 1990s to 2000s.

The first mood sampler is for the track, ‘Hello‘. This song is a remake of the song called ‘Goodbye‘ by Park Hye Kyong. The video itself showcases the retro vibes which fits nicely with the brass sounds heard. We can’t wait to hear her vocals on this track.

Her first concept teasers follows her wearing the same outfits featured in the first mood sampler. She looks gorgeous in this colourful outfit while looking quite cute with the clip in her hair. Her accessories are a great addition to her outfit, enhancing this overall vibe she is going for.

Her second mood sampler is for the track, ‘Je T’aime‘, which is originally sung by singer Hey!. From the preview, we get this nice and soft jazzy vibe.

Her second concept teaser features Joy enjoying her time outside by the beautiful nature. The green grass with beautiful pink flowers blooming contrasts nicely with her blue and white dress. She just looks so elegant sitting on the picnic cloth.

Her next set of teasers feature her casual and fun side as she is seen enjoying her time in doors while enjoying her watermelon. She is also seen with green nail polish which is the same colour as her album. It is quite a distinct colour and so, it contrasts well with the light coloured outfits.

The next track is called ‘Be There For You‘, which is a remake of the song by TOY. From the video, we hear that typical happy retro sound that puts us in a good mood. It has a melody that would go well with Joy‘s vocals.

Her fourth track is called ‘Day By Day‘, which is originally sung by As One. This song has this beautiful R&B vibe that touches our hearts. We can’t wait to hear her voice on this track.

In her next concept teasers, she is seen wearing a simple white dress while looking amazing on camera. The background is white, which goes nicely with her light green jacket. Since her hair is dark, it contrasts well with the overall concept.

Her fifth track is called ‘If Only‘, which was originally by Sung Si Kyung. She has turned this track into a duet track with Paul Kim. The song itself is quite soft and will go well with Joy and Paul Kim‘s vocals. We can’t wait to hear him harmonising together.

Her next concept teasers is simple and goes well with her fifth track. She is seen wearing a simple outfit while enjoying her bus ride. She looks quite peaceful in this set of teasers.

Her final track is called ‘Happy Birthday To You‘, which is originally by Kwon Jin Won. It is such a fun and groovy song that would leave us happy by the end of it.

Fitting to the name of the final track, we see her all dressed up for some type of party. It is clear that this pink outfit fits her nicely as she gives us different poses. She is elegant and looks amazing in this outfit. It is also clear that she had fun doing these concepts!

Meanwhile, she will make her hot solo debut on May 31st. Are you ready? Let us know in the comments below!