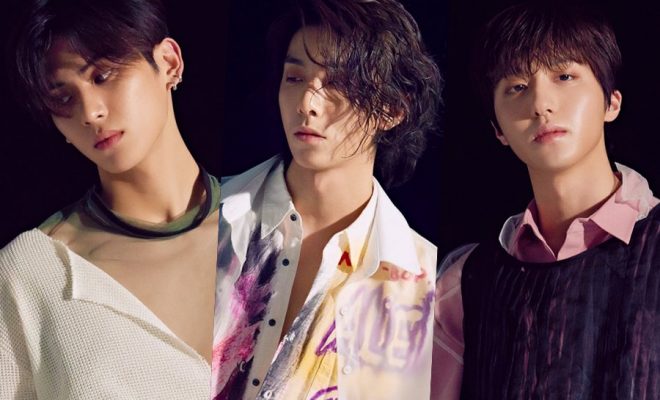 ‘Narcissus‘ is scheduled for release on Feburary 20.

We’ve already given you the lowdown on who ‘Narcissus‘ was, so take a big deep breath and let’s jump in to more teasers.

The latest release is the second teaser clip which has been titled ‘Temptation’. We get to hear more of the song, which sounds like it has an EDM feel to it, and is going to hit hard. We also get treated to a little bit of the choreography.

Yesterday saw the release of the highlight medley which gave us the chance to listen to a snippet of each of the six tracks on the mini-album.

There is a huge range of genres on the album spanning R&B, hip-hop, pop and EDM which just goes to prove how versatile they are.

Earlier the tracklist for ‘Narcissus’ was released. There will be a total of six songs most of which the members had a hand in writing and composing.

Jaeyoon‘s teaser image is full of confident quirkiness – which seems like a contradiction in terms – but you’ll understand if you take a look at the shot.

Taeyang is ethereal and handsome as he always is. The duality of the imagery is so evident in his shots.

Okay, so I’m supposed to be completely objective and all that, but I’m writing this article – so, just between you and me – Hwiyoung is completely challenging Inseong as my bias with this comeback.

In his teaser shots, Chani is all confidence in his individual shot, and in the dual shot he is the eptiome of suave sophistication.

Also released in the last day is another individual teaser image of Dawon.

SF9‘s sixth mini-album ‘Narcissus‘ is scheduled for release on February 20 at 6PM KST.

What do you think of all the teasers from SF9 so far? Who is your bias in SF9? Are you looking forward to the release of ‘Narcissus‘? Let us know your thoughts in the comments below.