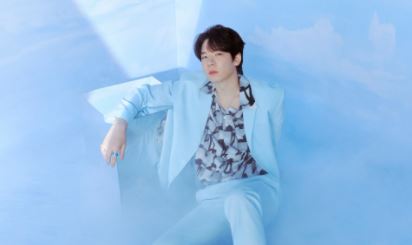 Raiden will be releasing his first mini album called ‘Love Right Back‘. Check out the teasers below!

The first image teaser is mainly printed in red with the words and some sections in black. It appears to be the album cover. The way it has been taken allows him to bring forth his fierce side. We can’t wait to see what he will bring to the music world.

For his first concept teaser, we see him going for a cool and charismatic look. The way he is posing and the way he stares at the camera is made to showcase his best sides. He surely has nailed the look with the extra added effects. It surely gets us excited for what’s to come.

He has revealed that NCT‘s Taeil and lIlBOI will be featured on his upcoming track.

His next concept teaser goes for that blue and cool effect. He looks great in this light coloured suit. It contrasts well with the overall room colour. It also allows him to showcase another side of himself. It is also quite a different look so it surely sparks our interest in his upcoming return.

The latest teaser features Taeil. He looks quite sophisticated in black and white. He fits in nicely with the way the images are shot. There are many paintings near him, allowing him to bring forth that sentimental vibes.

While his next set of teasers features Raiden in a car that is stuffed with beautiful yellow flowers. He looks amazing among the flowers. The aesthetics of this image is top-notch and also quite different from the other concepts he has released so far. With these teasers, we are ready to see how these concepts will connect together.

Meanwhile, he will drop this album on October 11th. Are you excited? Let us know in the comments below!