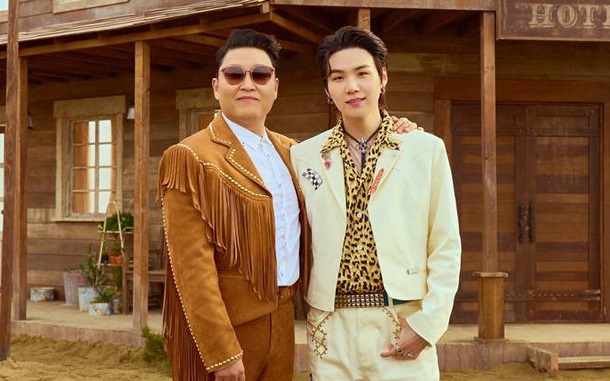 If all you know about PSY is ‘Gangnam Style‘ then you have been missing out – the man is a musical genius! Not only is there the extensive back-catalogue of his own music, but he is the brains behind ‘P-Nation‘ where he nurtures the careers of some of music’s most talented artists.

The release of ‘That That‘ from his album ‘PSY 9th‘, sees him return to the ultra-catchy, dance sounds of ‘Gangnam Style‘.

Produced by (and featuring) BTS’s Suga, ‘That That‘ feels like a song that fits right in with PSY’s boundless back catalogue. It has the pounding percussion of ‘New Face’, the pumping energy of ‘Right Here’ and, of course, the dance anthem-ness of ‘Gangnam Style’. It is such a fun and vibrant track that you’ll find yourself bopping along in no time. The inclusion of Suga’s rap is a stroke of genius – it’s fast and fierce – exactly how we like it.

The song feels like a celebration of all the things we love about K-pop – the good, the silly and the outrageous.

The clip that accompanies the song is just as fun and infectious as the song itself. It’s got a bit of a western theme going on – with all the fringing and cowboy hats that go with it. The choreography is bright and big and will have everyone up and dancing in no time.

PSY ‘That That’ (Produced and featuring SUGA of BTS)

On it’s release Psy and Suga‘s collaboration track ‘That That‘ reached No. 1 on iTunes Top Songs charts in at least 73 different regions, including the United States, Japan, and Canada.

What do you think of ‘That That‘ from Psy and Suga? Do you, like us think it’s going to take over the world just like ‘Gangnam Style‘ did back in the day? Let us know your thoughts in the comments below.