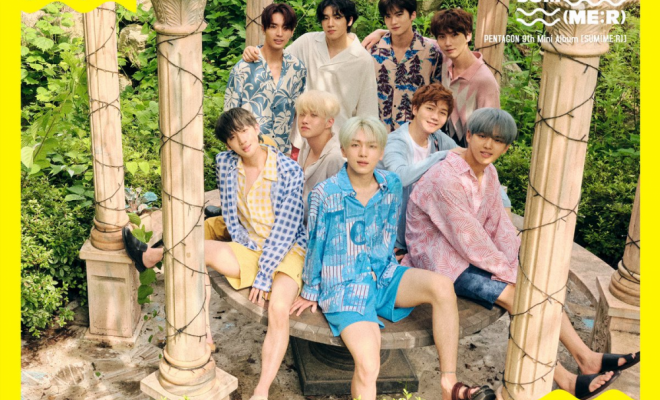 PENTAGON are having a relaxed ‘SUM(ME:R)’

PENTAGON are preparing for their comeback with their ninth mini-album ‘SUM(ME:R)’.

‘SUM(ME:R)‘ is scheduled for release on July 17, and will feature a total of four songs including the title track ‘Off Limits’.

They are flooding us with the cutest teaser images. There’s plenty of individual and group shots to keep every fan happy.

The images fit with the concept of the album of a relaxed and cool summer. The members are all looking like they are on a tropical vacation relaxing and enjoying each others company.

The earlier teasers that were released featured warm yellow borders and comfortable relaxed images of the members.

When the track list for ‘SUM(ME:R)‘ was released, it was revealed that two of their new tracks were produced by rapper Giriboy.  Their title track ‘Off Limits‘ was composed by Giriboy and Hui, while Hui, Giriboy and Wooseok wrote the lyrics.

The song ‘Fantasy Stick’ was co-composed by Giriboy, Minit and Hui, with Hui and Wooseok writing the lyrics.

One of the first teasers released, saw Cube Entertainment release a 7-second interview with each of the members asking them to describe their comeback in a single word. Kino and Jinho chose, ‘Summer‘, Wooseok, Yeo One, Shinwon, Yuto, and Hui failed to answer in time, Hongseok said, ‘Hongseok’ and Yan An said, ‘Idiot‘.

This is a really fast comeback for PENTAGON, as it is only four months since the release of ‘Genie:us‘ in March 2019.