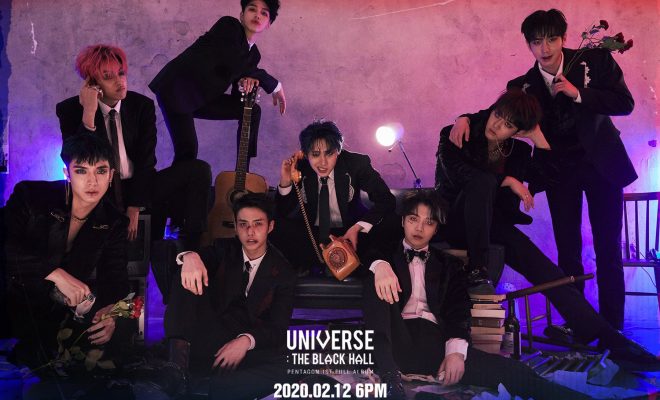 In welcome news for fans of PENTAGON, the group will be releasing their first full album in just a few days.

The album will be titled ‘UNIVERSE: The Black Hall‘ and is scheduled for release on February 12.

There have been a number of teasers and concept clips released giving us glimpses of the concept, tracks and vocals that we will find with this release.

PENTAGON continued to tease the release of their album by dropping a full set of two individual concept films for each member. Each of the concept films fits with the ‘Downside’ or ‘Upside’ versions that we’ve seen teased throughout the lead-up to the release date.

The group have released two sets of individual teaser images for their upcoming album. One set is the ‘Downside’ version which sees them all dressed in suits with the images giving off quite a strong energy.

The other set of individual concept images is the ‘Upside’ version. Even though they have a more relaxed feel to them, the members appear to be trapped in a web.

The album will feature a total of 11 songs, including the title track ‘Dr Bebe‘ (literal title), which was composed by Hui and will feature lyrics co-written by Hui and Wooseok.

PENTAGON‘s first full album ‘UNIVERSE: The Black Hall’ and the title track ‘Dr BeBe‘ are scheduled for release on February 12 at 6pm KST.