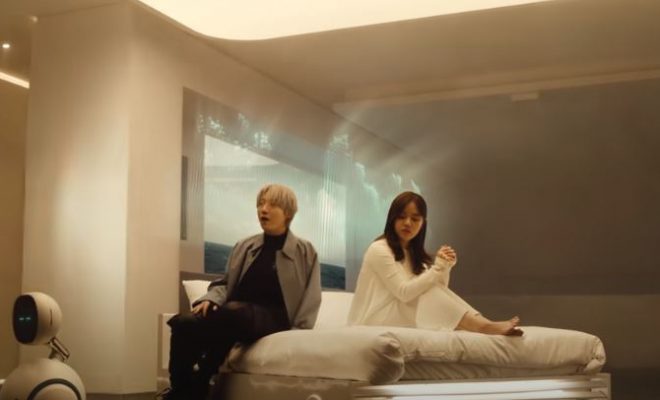 PENOMECO heads to the ‘Hotel Lobby’ in comeback MV

PENOMECO has made his long-awaited return with the album, ‘Dry Flower‘. He has not released one but three MVs for three tracks featured on this album for this comeback. So, check it out below!

The first MV is for the track, ‘JAJA‘. The video begins with what appears to be a utopia world before it transitions to PENOMECO‘s vocals. He has such a beautiful voice that leaves you smiling throughout the video. His voice is just so clear and clean on top of this simple melody, leaving us with a vibe that we can all chill to. The video itself is also quite chill when we see this cute interaction between PENOMECO and the female protagonist. It is clear that she is trying to learn and adapt to this new world. It is also a cool transition to an animation where it showcases what she is currently experiencing emotionally before she was awakened by warning sirens. Overall, the storyline can become quite complicated once it is further analysed. There are many deep and hidden messages behind this video. Nevertheless, the song itself is a standout in the video.

The next track to get an MV is the title track, ‘Hotel Lobby‘. For this MV, he has chosen to go all animation where it features mostly a birds-eye view of the hotel lobby as people come in and out of the doors, as well as chilling by the couches. The song itself is another stunning song where we hear his soothing vocals. He sings so beautifully on top of this groovy beat. Verbal Jint is the rapper in the song as he too showcases his chill rap verse. It is a great fit into this song as he too brings the right mood to the song. The transition between the rap and vocal verse is also quite smooth. As the video progresses, it appears there are dark messages behind this animation. As it begins to rain, we see a worker malfunction and easily replaced by another. This may have a deeper meaning and connection to the current society.

Finally, he has dropped the MV for ‘Insomnia‘. For this MV, he has also gone for an animation. This appears to have a connection with ‘JAJA‘ where he is replaying his memories with the female protagonist who has now disappeared. Going with this vibe, the song sounds quite emotional to listen to. One can’t help but feel chills while listening to him sing. He has a way to ride the beats that make it quite enjoyable to listen to. What is also great about this song is the fact that he has done his own rap verse, making it more meaningful and touching to listen to. The contrast between his rap verse and vocal verse is distinct, allowing it to be interesting to the audience. The video ends with him breaking free from the prison and seeing the real world for what it is. This is well-connected to the ending of ‘JAJA‘ where PENOMECO is seen sitting on the bed surrounded by the grass field.

Other news that is related to PENOMECO is the fact that he has officially joined P Nation. This marks his latest album as his first album release under P Nation. We hope to see more releases from him this year. Meanwhile, which track did you like the most from his latest album? Let us know in the comments below!