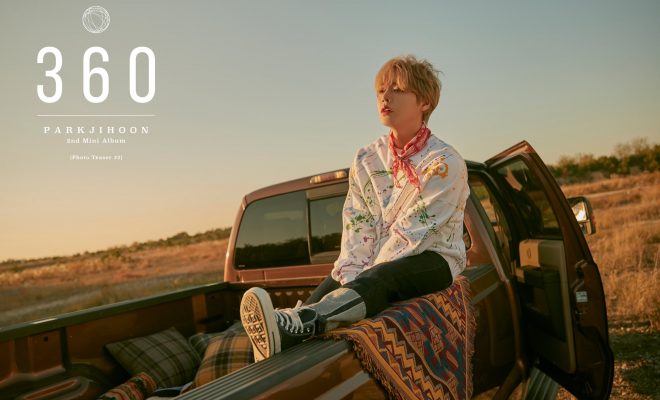 Park Jihoon gives you a preview of ‘360’

Park Jihoon has revealed the tracklist, the album preview and the MV teaser. Check it out below!

From the album preview, it gives us a look at each of the tracks. ‘I Am‘ is a sweet piano song that puts you in a good mood. It goes well with his tone of voice. ‘360‘ is an upbeat song that has you grooving along to the song. It is nice to see them trying different sounds that bring out the best in his voice. ‘Whistle‘ is another tropical and groovy song that puts a smile on your face. ‘Hurricane‘ slows it down allowing it easy to sit back and enjoy his vocals. ‘Casiopea‘ has such a beautiful synth sounds that feeling the winter breeze. ‘Still Love U‘ is another one of his slow songs that allows you to stay calm and relax to his tone of voice.

He has also dropped the MV teaser for ‘360‘. From the video, we can get a sense of the kind of concept he is going for. It is a party bop and has you ready to dance and have fun.

Meanwhile, he will make his hot return on December 4th. Which track caught your attention? Let us know in the comments below!

Tracey Luu
← Previous Story VIXX’s Leo surprises us with ‘December, The Night Of Dreams’ teaser
Next Story → Stray Kids brings you on a journey in new ‘Clé: Levanter’ teasers