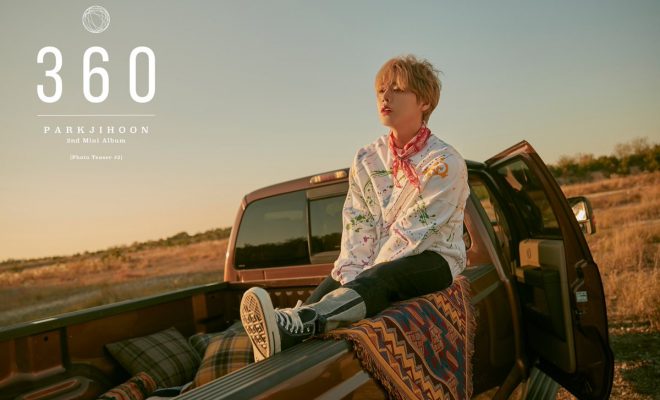 Park Jihoon gives you a ‘360’ look into his upcoming comeback with teasers!

Park Jihoon prepares for his upcoming return with ‘360‘. This is his first return since debut. He has dropped teasers for it. So, check it out below!

He has revealed the comeback schedule. He will be releasing the image teasers from November 20th to the 22nd. Following on is the tracklist, the MV teaser and album preview on November 25th, 28th and 29th. Finally, the art film and the lyrics image teaser on December 2nd and 3rd.

The first image teaser features him outside in what appears to be a praying pose. The rainbow reflection is found near his hand with the lovely sunlight panning across his face. This kind of calming image really captures fans’ attention.

The second image teaser has him sitting at the back of an ute. It appears that the sun is setting, giving us a beautiful gradient in the sky. It looks like he is lost in the beauty of the scenery as he stares out and beyond the plain fields.

The third image is a night time image with a piercing red colour coming through. Unlike the other images, this one gives us a fierce look of him as he stares down the camera.

He will make his hot return on December 4th with his second mini album, ‘360 ‘.