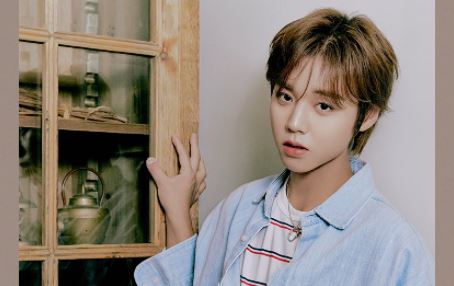 Park Jihoon is returning with his fourth mini album, ‘My Collection‘. He has revealed the comeback schedule and the teasers. So, check it out below!

From the comeback schedule, he will be releasing the tracklist on July 31st. The concept teasers are set for August 2nd and 3rd. The mood spoiler, concept trailer and art film are scheduled for August 4th, 5th and 6th respectively. The MV teaser and performance teaser will be revealed on August 9th and 10th. Finally, the highlight medley will be dropped on August 11th.

The tracklist reveals that this album has a total of six tracks including the intro track, ‘Present On The Stage‘, the title track, ‘Gallery‘, ‘Lost‘ featuring lIlBOI, ‘Strawberry‘ and ‘I Wonder‘.

He has also revealed his first concept teaser. He is wearing this lovely leather jacket that fits the colour of the overall scenery. To contrast with all the blue in the image, he is wearing a red shirt inside. For this set of teasers, he definitely gives off this teenage boyish concept that gives him well.

Meanwhile, he will make his hot return on August 12th. Are you excited for his return? Let us know in the comments below!