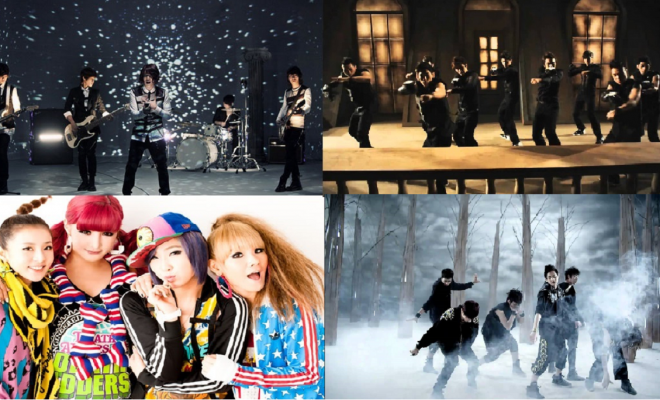 First up, let’s take a look at our picks for the top ten K-pop songs from 2010.   2010 was a great year for K-pop with a lot of music from a lot of great acts, some of whom are no longer around making music.

They’re in no particular order, we just think that they happen to be some of the best tracks from a year that was full of amazing music.

BEAST (now known as HIGHLIGHT) debuted in 2009 and were prolific and creative in everything from their vocal style to their visuals to their choreography.  ‘Breathe‘ was no exception.  The vocals and choreography remain a favourite of many and is a prime example of all things great about K-Pop.

4MINUTE remain one of the most influential of the girl groups to come out of K-pop.  They mixed a ‘don’t mess with me’ attitude with a song that had a strong techno influence that featured auto-tuned vocals to deliver a performance that has stood the test of time.

SS501 released ‘LOVEYA‘ as the title track from their eighth mini-album ‘Destination‘.  It is a grand, mid-tempo track that features heavy beats combined with beautiful orchestral strings and a piano melody.  Again it features plenty of auto-tuned vocals – but that just adds to the charm of the track.

SHINee released the album and title track ‘Lucifer’ in July 2010, and what a release it was!  This song remains a firm favourite amongst SHINee fans to this day.  It’s strong dance-electronic sound was something that SHINee became known for.  The choreography for the clip was amazing – but even better than the song is the styling of the members for this clip!  They are some of my favourite looks on Key and Taemin ever.

The music clip may have just overshadowed the song with this release.  It featured a breakdown in the relationship between CL and her boyfriend, and controversially featured scenes of him hitting her.  However, it’s still a great track in our opinion from the queens of K-pop with CL‘s rap a standout feature.

Okay, so if you know me, you knew that this track was going to feature on this list.  FTISLAND are in my opinion one of the greatest acts to come out of South Korea.  This song gives us a taste of what Hongki can do with his vocals and the tight musicality of the group as a whole.  As with other clips in this listing, the styling is a standout from the outfits to the hair styles.

Girl’s Generation had a massive hit with the song ‘Run Devil Run‘ back in 2010, a notable fact about the track is that a demo version of the song was recorded by American artist Kesha, although she never released the song formally, the demo version was leaked.  Girls’ Generation did a great job on the track with its hypnotic back beat pushing the song along at a steady burn.

There was never going to be a list of our favourite 2010 tracks without this song appearing on it.  BIGBANG members GD and TOP made for a formidable combination on this and other tracks that they have done together as a unit.  The beat thumps along on this track and the two of them do what they do best – rap!  You can just tell they were having a ball when they recorded this.

This was miss A‘s debut track back in July 2010 and immediately established themselves as firm K-pop favourites.  The sassy track allowed the members to showcase their strong vocals without having to go over the top.  The clip also showed off their great choreography which fit the mood and concept of the song perfectly.

This is by no means an exhaustive list, and there are so many other great tracks that came out on 2010.  Why don’t you tell us some of your favourites?