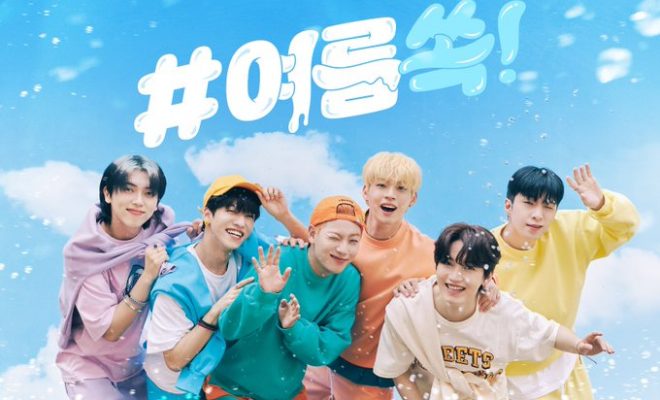 ONF is preparing for their upcoming summer return with their summer popup album called ‘POPPING‘. Check out their teasers below!

From their first image teaser, we see this cool coloured image with a temperature that is showing a high temperature of 38 degrees Celsius! It looks like they are preparing us for a summer comeback!

Their next teaser is a GIF. This GIF is made to look like we are looking through a pair of binoculars. It is moving in a circular motion, allowing us to get a glimpse at each member, as well as the location they are at.

They have also revealed their individual teasers. Each member has a total of two individual teasers. They are once again seen wearing that boy’s scout outfit. However, this time, the members are seen wearing an additional coonskin cap that is typically for winter. This hat goes well with their location, which appears to be in the snow despite the nice weather.

They have also dropped their tracklist. This album will have a total of five tracks including ‘Popping‘, ‘Summer Poem‘, ‘Dry Ice‘, ‘Summer Shape‘ and ‘Summer End‘.

Their second concept teasers definitely fit in well with their summer concept. It is clear that summer has come to this concept as the members are seen wearing much brighter outfits with snow droplets scattered around them. It definitely is a concept that suits them well.

Meanwhile, the group is set to make their hot return on August 9th. Are you enjoying their summer concept so far? Let us know in the comments below!