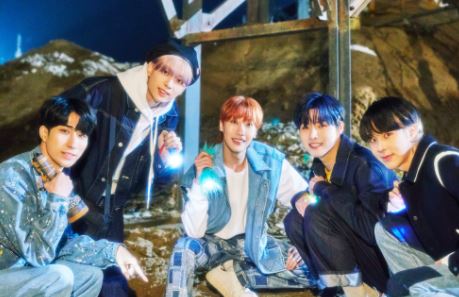 Yes, that is right! ONEWE will be releasing their 2nd mini album called ‘Planet Nine: Voyager‘. Check out the teasers below!

They have revealed their first concept teaser. This teaser features them wearing black and white suits while appearing at a warehouse or construction area. They definitely look super formal in such an area. They are also seen posing with their instruments. The colour scheme used helps complete the overall vibe of this teaser. It surely has us excited to see what else they will be releasing.

From the tracklist, there is a total of six tracks including ‘Universe‘, ‘Envision‘, ‘Montage‘, ‘Trigger‘, ‘Orbit‘ and ‘From‘.

They have also revealed their individual teasers. They are seen wearing the same outfits. Since the image is taken during the night, their outfits definitely contrast nicely with the overall dark location. Since the location is a construction site, the yellow ladder and items behind them bring dynamics to their images. It surely allows them to look super cool and charismatic.

The next teaser is their second concept teaser. This time, we see a more laid-back and chill image. They are seen smiling. They definitely look like they are having fun. Their outfits are also quite casual, which fits with the vibe they are going for.

Their latest teaser is their individual second concept teaser. The members are seen posing during the memory. Something about the way the images are taken gives off this chill and relaxing vibe. It is the kind of feeling we want as the day comes to an end. Each member looks great in these outfits as they go for a stunning look.

Meanwhile, they will make their hot return on January 4th, 2022. Are you enjoying the teasers so far? Let us know in the comments below!