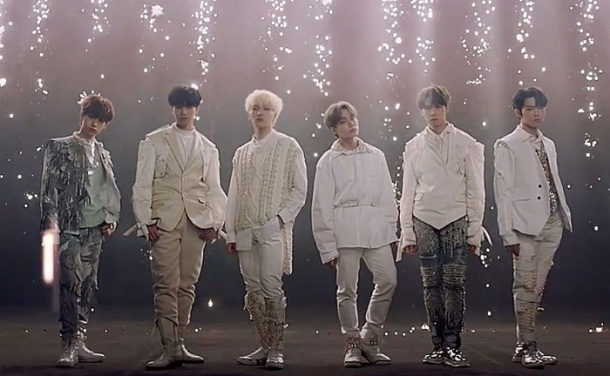 RBW Entertainment‘s rookie boy group ONEUS have made their official debut with the release of their mini-album ‘Light Us‘ and the title track ‘Valkyrie‘.

As we reported previously, the name ONEUS holds the meaning that ‘Us’ will become ‘One’ when all the individual’s strengths are combined together.

The group are living up to the hype that was created in the lead-up to their official debut with ‘Valkyrie‘. We’ve been told that ONEUS will be focused on dance music and this track is a great example of the genre. It’s jamming a throbbing EDM sound with classic K-pop sounds – and it’s all done seamlessly.

The song opens with a surprisingly catchy guitar loop, before hitting us with a down and dirty hip hop ride. Then, before we’ve got time to recover we slam right into the chorus before we get hit with a wall of distorted electronic sounds and a swirling hook. The song has an edginess to it that we don’t often get to see from debut releases.

The accompanying music video does a great job of staying true to the concept of the song, a Valkyrie is a figure from Norse mythology and the clip seems to play on that mythology. The members perform on and amongst a range of sets seemingly looking towards ‘Valhalla’ in an attempt to find the Valkyrie. The choreography is slick and smooth whilst still being edgy and leaving us wanting more.

It would be remiss of us not to finish the job we started previously in introducing you to the members of ONEUS.

So, please see below the concept films and teaser images for the remaining members of ONEUS; Xion, Lee Do, Keon Hee and Seo Ho.

ONEUS  held their debut showcase ‘Masterpiece‘ on the same day as they released ‘Light Us‘ and ‘Valkyrie‘.

What do you think of the debut song ‘Valkyrie‘ from ONEUS? Now that they have debuted, do you have a bias already? Let us know your thoughts in the comments below.