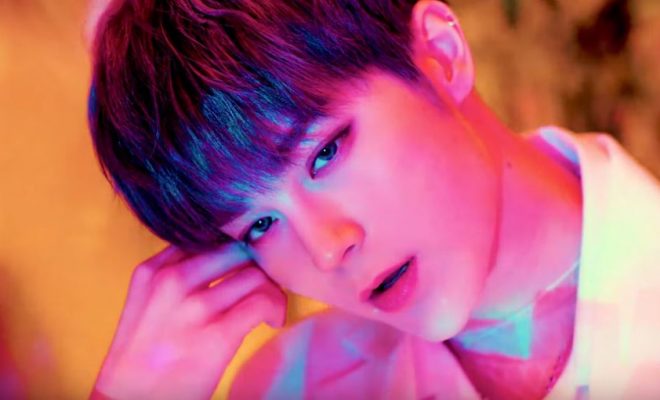 NOIR continues to showcase their own interpretation of what ‘Doom Doom‘ sounds like to them. Each member also gets their own individual image teaser. They have also revealed the highlight medley. So, check it out below!

Like the other members, we get to see that pure and honest side of them while hiding behind the not-so-clear curtain. Nevertheless, it gives us that false hope of been a soft and delicate song. Each member has his own way of representing the song for us. They put their own twists in the way they present us. Some are seen explaining the song while others put their creativity to the test with their unique styles.

On top of that, they have revealed a SPOT teaser in which gives us a proper look into the concept. They put good lighting to use, which help set the tone of the video and song. These neon lights and the way his hums fit with the vibe really has fans quite excited for what’s to come!

They have revealed the highlight medley, giving us a preview of all the tracks on this album. The intro track is quite intense and really has you drawn into his deep sounds. It is quite a way to introduce the album. The title track is what fans have expected: loud and quite upbeat, which is quite fitting with the kind of music they have shown previously. ‘Diamond‘ is another loud song that really fits with their tone of voice. It is the kind of song that would have you bopping. ‘Hello‘ is one of their soothing songs that allows us to enjoy their tone of voice while showing the other side of them.

Meanwhile, NOIR will make their hot return on June 12th. Which track do you like so far? Let us know in the comments below!