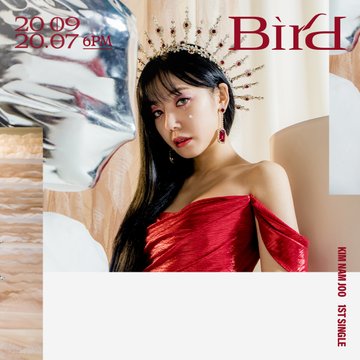 Namjoo stares at the ‘Bird’ in concept teasers

Namjoo has begun teasing for her upcoming solo debut. Check out the teasers below!

She has dropped her debut schedule. She will be releasing her image teasers from August 28th to September 1st. Following on is the pre-performance and making image teaser set for September 3rd, 5th and 6th. The MV teasers will be revealed on September 4th and 7th.

Her first image teaser reveals who have composed, arranged and written the lyrics of this song. It also appears to showcase a snippet of the lyrics of her upcoming song.

Her first concept teaser showcases her embracing a dark look. Even though her surrounding is quite light like a dove, her dark makeup and hair style is the total opposite. It allows her to look quite alluring and beautiful.

Her second concept definitely brings out her beauty. She looks amazing in red, with matching earrings and lipstick. To go with this elegant look, she is also seen wearing a fancy golden crown with beautiful ruby gems on it. It is quite a majestic look.

This second concept teaser has such a creepy melody. However, its intensity builds, which fits in well with the mood of the video. It definitely leaves us more curious than ever about the songs she will release.

Her latest concept embraces the dark colours as she gives us quite intense stares. It is quite a look and definitely contrasts well with her previous image teasers. Overall, it is quite a devilish look to go for.

She has also dropped the concept teaser for it. It has this distinct beat that has you bopping along to it. It is quite fitting to the slowmo of her moving to the beat. One can’t wait to see more of it.

Meanwhile, she will make her hot debut on September 7th. Are you ready? Let us know in the comments below!