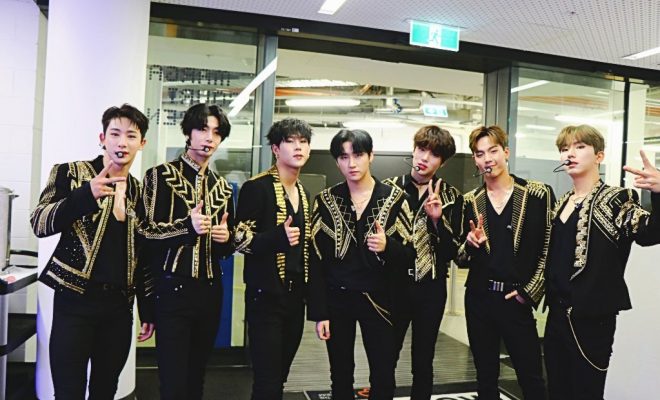 MONSTA X conquers the Melbourne stage with their energy and vibe, finishing up their ‘We Are Here’ Australian tour

Two stunning nights in Australia with MONSTA X has made Australian Monbebes the happiest fans on earth. On June 8th, MONSTA X ended their ‘We Are Here‘ Australian tour in Melbourne. With all the hype that came from their unexpected comeback teaser earlier that day, fans were excitedly waiting for the members’ presence on stage.

As it got closer to its show’s starting time, the noise in the room became deafening and we were able to feel the excitement in the air. When the lights went out, it was at that point that everyone in the venue knew they were in for the show of their lifetime. MONSTA X appeared on stage and kicked off the show with some of our favourite tracks including ‘Shoot Out‘, ‘Hero‘ and ‘Trespass‘. The red stage lighting and all out aggression in the choreography that they put into the performance of the songs was enough to really plant you firmly in the moment. The fans were left stunned and screaming with their flawless moves yet strong and sharp gestures. It was definitely a sight to see!

After those performances, it was a breather for the members but also a time for connection with the fans. They did their greetings and hellos to the fans before I.M lured us in with our national chant “Aussie Aussie Aussie Oi Oi Oi“. The fans gave them the loudest chants they could possibly have wanted. Before we knew it, the stage has transformed into a classic party vibe with the bar, and they have us grooving and partying along with them! The tracks they performed included ‘Party Time‘ and the Korean version of ‘Play It Cool‘. Joohoney also gave us the privilege of listening to a snippet of the English version of ‘Play It Cool‘.

One of the highlights of the show is the videos they showed during the times they weren’t on stage. It was what sets us up for the stages to come. The first videos had them showing us their individual hobbies. We had Minhyuk doing beauty, I.M with English time, Joohoney cooking, Kihyun making coffee, Hyungwon talking about his sense of fashion and Shownu with his Mukbang and ASMR session! The editing of these videos made it so much fun to watch, especially when the members’ channels are intertwined with one another.

This set up their special unit stages. First up is Hyungwon, Minyuk and Kihyun with their full performance on Bazzi‘s ‘Myself‘. They gave us their all with their gentle sexiness and their perfect vocals, fitting to the groove of the song.

Following them is the rapline: Joohoney and I.M, who spread energy throughout the entire arena. They knew the right sounds and beats to make everyone get on their feet and head bop along to the song. What made this performance the best was seeing Joohoney playing the drums as a break within the song. It was also quite cute when he had to change the drum sticks because it appeared that he had broken one of them! This track was written by them, and they called it ‘Sambakjja‘. It is meant to resemble “Triple Rhythm” or “Triple Combo“, as described by I.M.

The final unit stage was none other than Wonho and Shownu‘s stage. They went for that R&B and full-on masculine sexiness that had fans in awe of the sight. The track was called ‘Mirror‘ and they had a wall between them when dancing. With the wall, it left all Monbebes in awe and loving every moment due to their synchronised movements and sleek moves. They knew what strings to pull to have us all on the edge of our seats as they danced with one another to end their performance.

Following these unit stages, they sweetened the air with such lovely and soft tracks like ‘Honestly‘ and ‘White Sugar‘. They were dressed in such cute outfits as they serenaded fans with such soothing songs. However, that all ended when the next VCR came on and labelled each member as the 7 deadly sins where Hyungwon is Pride, I.M is Envy, Kihyun is Loneliness, Joohoney as Greed, Wonho as Sloth, Shownu as Wrath and Minhyuk as Agony.

With that, they came out for dramatic performances of ‘No Reason‘, ‘Myself‘ and ‘DRAMARAMA‘ before they asked fans to stand up and party along with them. Because of that, we all knew that the night was about to get even better. The members definitely brought their all to this stage, partying it out like there was no tomorrow during ‘Oh My‘ and ‘Special‘! They were on fire and were spraying so much water on stage, on their fans and on themselves throughout ‘Fallin’.

Following that stage, they talked about what they did in Melbourne. Some members went to the zoo, went downtown, to the beach and also to the Eureka Tower. That lead us to their “Final Stage” with ‘Alligator‘. They disappeared off-stage and that was when we knew that “Encore” was coming!

Fans were chanting for MONSTA X to come back on stage! Inevitably, the crowd was getting wilder as a DJ table was set up on stage! That meant that DJ H.ONE would be greeting us! We were correct as Hyungwon took the stage and gave us his best party mix. Fans were enjoying the mood as they danced along with the music. I.M also took to the DJ table and showed us a few of his tricks before blasting out ‘Rodeo‘ that had Monbebes screaming so loudly that the venue was shaking.

The real ending was on its way as each member gave their final words of goodbye. A summary of what they said is below:

Hyungwon: “I went by myself to downtown listening to music, seeing pretty people and buildings. It was a healing time for me that gave me strength. This is a city that I want to come back to. More than anything, I want to see you guys again. The time I spend with you is so precious. Thank you for coming.”

Wonho spoke in Korean before miming along to someone’s English: “Previous show, members have prepared their English Ment, it makes me want to do that now. Kind of iffy about using English, I.M always supporting me but speaking English is always so scary to me. But people are here for me, so I want to do a little something for you.” “I always wanted to come to Australia. My heart is full. I want to be your guys’ strength, just as much as I get strength from Monbebes. I just love you guys. Let’s meet each other next time. I promised to be back.”

Shownu: “I will try and talk with looking at the screen. Just kidding! During our visit to Australia, we got to meet our Monbebes and had some free time here. We made beautiful memories in a beautiful country and I want to come back again. Thank you for supporting us. We hope to shine everywhere we go.”

Joohoney: speaking in Korean since he wanted to tell fans so much. (Fans were understanding and he gave a cute thank you) “Throughout the show, I looked at each one of you. It feels like we are one when we are running together. That’s why I have to come back to Melbourne. The intensity is so great. I think you are going to come out of my dreams. In an event there is a dream, you will come and play with me right? I Love you and thank you for all your support. I promise to come back.”

Minhyuk: “Last night had the most beautiful view I ever seen. But not as beautiful as our Monbebes. To show me such beauty, I’m so thankful to you guys. Thank you for coming. I love you so much.”

I.M: “To be honest, I stayed in the hotel cause my condition was not too good.” (Fans went aww to which the members said “no, no it’s not that bad”). “Hanging out, having fun and watching the great view. The members went downtown, to the ocean and famous places. I was upset since Australia is famous for their beautiful city. So sad that I couldn’t see it, but I am very happy and satisfied right now because of the view in front of me. Thank you for giving me so many cheers. We didn’t think we will have a concert here and in such a huge stage”. Hyungwon said that “I was always thinking of you when I go downtown.” To which, I.M said “Why didn’t you hit me up then?”

Kihyun: “Two days here I went downtown and to the ocean. The best part in Melbourne is you guys. I am touched by you guys. When you are with someone who you love, you are happy for no reason. You guys are my ONE. You guys are my happiness and my love.”

MONSTA X finished off the night with ‘By My Side‘, as they waved goodbyes and bowed to every section of the arena. A special mention to Wonho ending the night with his shirt off with a lucky fan getting the drenched sweaty shirt! The sight was godly! Meanwhile, the interaction and connection that Melbourne Monbebes had with MONSTA X that night is unforgettable. It was a night to remember!

With that, MONSTA X ends their ‘We Are Here‘ Australian tour with a bang. We would love to thank Starship Entertainment and Frontier Touring for giving us the opportunity to see them live and bringing them to Australia.

Written and edited by Tracey Luu

Tracey Luu
← Previous Story All Access Asia exclusive: Interview with Sandy of Neko Nation
Next Story → We want you to join our team!