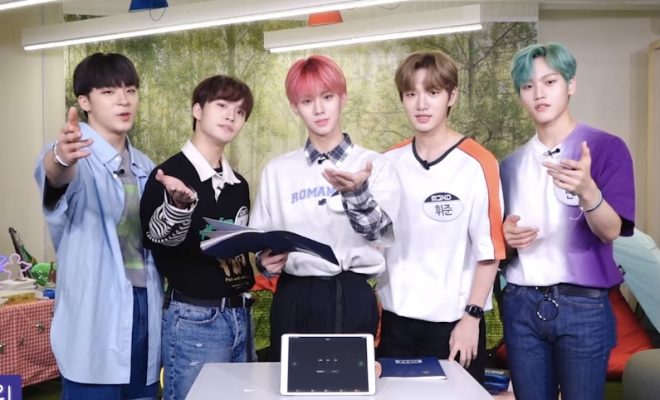 MCND continues to drop their teasers for their upcoming return with ‘The Earth: Secret Mission Chapter.1‘. Check it out below!

They have revealed the tracklist. There is a total of six tracks including ‘Movin’‘, ‘Cat Waltz‘, ‘BowwowwoW‘, ‘H.B.C’, ‘Play Pungak‘ and ‘Reason‘.

They have dropped the next group teaser. This image features them on the couch while enjoying each other’s company. It looks like they are having a great time with lots of food on the table. Their outfits are quite casual and chill, which goes nicely with the vibe of this image.

They have also released the unit teasers. These image teasers continues to have that fun and cute vibes of the group teaser above. It is nice to see them been comfortable with one another as they show off their beautiful smiles for the camera.

They have also given us a chance to look at their individual teasers. The individual teasers has the members posing in front of this bright orange curtains with contrasts outfits that shine against this curtain. They have this boyish look that is casual. Their cuteness also shines through these images, which goes nicely with this latest set of concept teasers.

They have revealed the MV teaser for ‘Movin’‘. It has this upbeat rhythm that is played in the background before it comes in at the end like a banger. It surely gets us excited for its official release and how their voices will fit into this track.

They have also give fans a chance to preview the other tracks on this album. ‘Movin’‘ continues to have that uplifting and fun vibe that one would easily move along to. ‘Cat Waltz‘ is such a bright song that goes nicely with their tone of voice. ‘BowwowwoW‘ has that chanting element that really hooks you into its sound. ‘H.B.C‘ has that nostalgic melody that contains a beat that brings forth that dance element. It surely already sounds like a banger. ‘Play Pungak‘ brings down the vibe, giving us a more cutesy sound. It is nice to see them experimenting with their sound and nailing all the different types of genres out there.

Meanwhile, they are set to make their hot return on August 31st. Which track caught your attention? Let us know in the comments below!