MAMAMOO is currently gearing up for their eighth mini album, ‘BLUE;S‘. As many knows, this mini album is part of their four seasons project. To get fans excited, they have finally revealed the tracklist. So, check it out below! 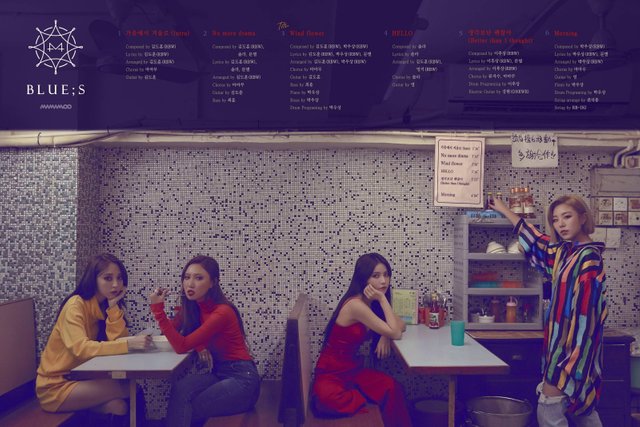 So, this album will have a total of six tracks including the intro track, ‘From Fall To Winter‘, the title track, ‘Wind Flower‘,  ‘No More Dream‘, ‘Hello‘, ‘Better Than I Thought‘ and ‘Morning‘. From this image, it is also revealed that member Solar and Moonbyul has participated in the composition of the track, ‘No More Dream‘. Furthermore, Solar had written and composed the track, ‘Hello‘. It definitely is quite exciting to see the kind of tracks they will be releasing this time around. One thing for sure is that it will probably embrace this dark image they are going for this comeback.

Meanwhile, MAMAMOO is set to make their hot return on November 29th. Which track are you looking forward to? Let us know in the comments below!