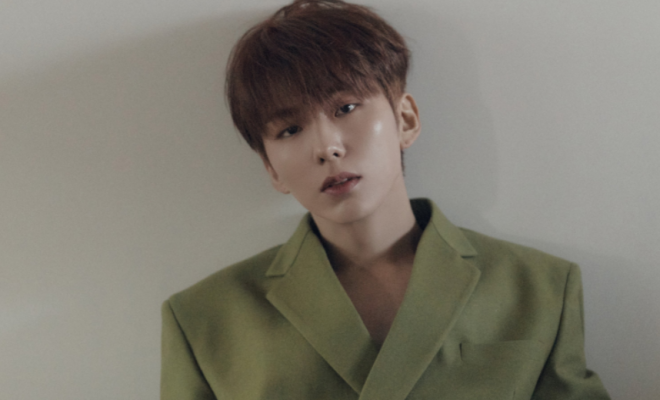 Kihyun brings you the concept teasers for ‘VOYAGER’

Kihyun continues to teas for his upcoming solo debut with ‘VOYAGER‘. Check out the latest teasers below!

In his first concept film teaser, we get this chill and uplifting melody that accompanies the behind footage of his image teasers. It is a great way to really hype us up for this debut.

His first concept teaser features him wearing a lovely white outfit as he bare his chest. This is definitely a look that any MONSTA X member can pull off. The overall scenery features a beautiful bed of water as he takes his images by the rocks. The lovely sky backdrop contrasts well with his outfit and the surrounding smoke/fog.

The second concept teaser maintains that overall water concept. This time, they have taken the images to make it look like he is underwater. The overall background is blue, which helps enhance this vibe. We also get to see the refraction of light through water, which brings depth to this concept style.

His third concept teaser appears to showcase him leaving this ocean. He is seen holding a white suitcase that contrasts nicely with the overall dark background. He too is wearing a dark outfit that pops out against the white suitcase. The way the lighting is done for this concept helps bring another dimension to his image, enhancing the complexity of the image.

His next concept teaser now features him in a deep blue suit while being shirtless underneath the blazer. The overall background is just white. So, by adding this dark blue curtains throughout the image help make the images look more sophisticated, especially since the chosen colour matches up nicely with his outfit.

His first mood sampler features this mysterious melody that draws you in immediately. It is quite a mysterious song that leaves us more excited than ever. We are super ready to his voice on top of this type of melody.

His new concept teaser features him wearing the green outfit that was featured in his mood sampler. He looks great in green as he goes for a serious and charismatic look. He surely knows how to capture us with his overall look and posture.

His latest concept teaser has him embracing the chill vibes. He is seen wearing a simple white shirt, matched up with jeans. It is a light-hearted look that fits him nicely. Even the scenery is kept simple to allow us to admire this concept.

Meanwhile, he is set to make his hot debut on March 15th. Are you enjoying his concept teasers so far? Let us know in the comments below!