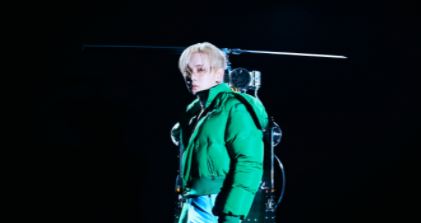 Key has begun releasing his teasers for his upcoming return with ‘Bad Love‘. Check it all out below!

In the intro clip, we see that desert or moon setting as Key walks towards a machine. It ends quite abruptly, leaving us more curious than ever.

In the mood sampler, we see him wandering around a unique and interesting place with many people stuck in single cages. The video takes a turn as we see something break into two, which ended showcasing two Keys in the video. It is quite a concept that would require one to rewatch to fully understand what is happening. The video ends by showcasing a section of the song. It is quite different from what we heard for his pre-release track. It surely has us super excited for more!

For his first concept teaser, we see him on that flying machine that has him floating across this piece of land. The colour scheme is quite bright and colourful in comparison to his dark outfit. It is quite a contrast and surely allows him to shine.

His second concept teaser has him stepping out of his flying machine and exploring this area. As he is exploring, there are two people who caught him and ultimately left him hostage. As we follow along with the images, it is quite interesting how it follows a comic-like vibe as each image tells us a story that leads to the next.

The third concept teaser undergoes a different look. This time, it is set at night where we get to see the beautiful galaxy behind him. He looks amazing in the black outfit as he continues to explore this land. He surely knows how to go beyond and extra for his teasers.

For his fourth image teaser, we get each individual profile image. The final image has them posing together like a family portrait. It looks like Key has been accepted into the family as they appear to enjoy each other’s company.

His fifth teaser has him wearing a green outfit that makes him look like he is from outer space and a different time zone. He definitely knows how to pull off the look while going serious. This kind of look definitely allows him to be extra and allow him to go all out!

His latest teaser brings out that futuristic vibe. Especially with the use of blue neon lights and the writings on his face, it surely fits nicely with the concept teasers he has been dropping. He surely knows how to capture us every time and leave us on our toes. It is super unique and different, leaving us excited for what’s to come.

Meanwhile, he will make his hot return on September 27th. Which concept caught your attention? Let us know in the comments below!