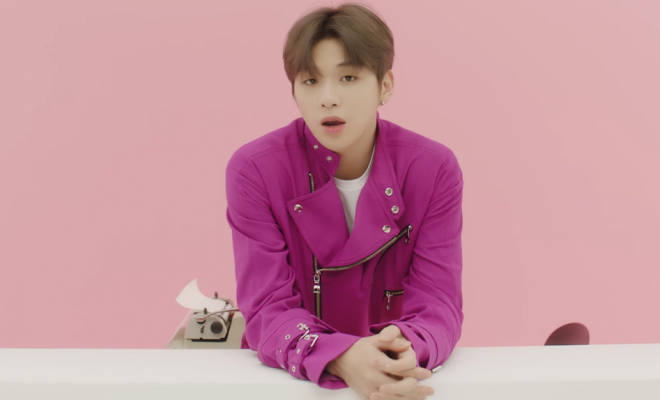 Kang Daniel has finally made his long-awaited and much anticipated solo debut with the release of his mini-album ‘Color On Me‘ and the title track ‘What Are You Up To‘.

‘What Are You Up To‘ is a soothing, synth-driven pop track that was arranged and composed by well-known music production house Devine Channel, who worked closely with Daniel on the album. The track’s lyrics express his love and affection for someone that he wishes would ring him up.

Speaking at a press showcase for his album, Daniel explained the meaning behind the album title, “It’s not a mini album, it’s a special album. I wanted to show people my limitless potential and a wider variety of stages than before. I hope I am able to captivate many people with my unique colors.”

Towards the end of the press session, the talented performer promised to inspire fans by working hard and producing good music for them. “I want to be a person from whom you could get hope when you think about me.”

The music video is bright and colourful, and Kang Daniel greets fans who have been waiting for his debut dressed in colourful suits that match his effervescent personality His bright and cheerful aesthetics are on full display along with his charming and upbeat personality.

Kang Daniel ‘What Are You Up To’

Upon its release ‘Color On Me‘ topped the iTunes album charts in at least 15 countries including Cambodia, Hong Kong, Indonesia, Laos, Macau, Malaysia, Philippines, Qatar, Saudi Arabia, Singapore, Taiwan, Thailand, Turkey, United Arab Emirates and Vietnam. In addition, the title track ‘What Are You Up To‘ hit the top of the real-time music charts in Korea including Bugs, Naver and Soribada.

What do you think of Kang Daniel‘s ‘What Are You Up To‘? Have you listened to his mini-album ‘Color On Me‘? Let us know your thoughts in the comments below.