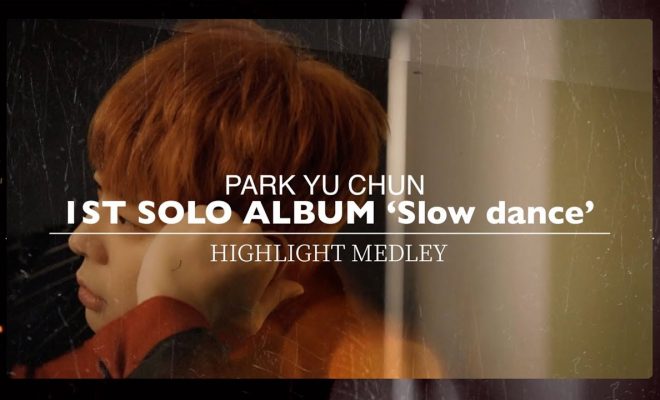 Yoochun has revealed the highlight medley for ‘Slow Dance‘. So, check it out below!

This album has a total of nine tracks including the title track, ‘Slow Dance‘ and its Japanese and Chinese version, ‘Strong‘, ‘Meet Again‘, Thornbush‘, ‘Magic‘, ‘All The Paths Were Memories If You Look Back‘ and ‘Graduation‘. ‘Slow Dance‘ has that melody that fans have expected from this track’s title. It is soothing and is the kind of song one would want to ‘Slow Dance‘ to.

‘Strong‘ has a more deeper vibe with the lovely cello sounds. It shows a more harsher sound from his voice. ‘Meet Again‘ is a ballad song with a soft melody. Because of its nature, you can’t help but enjoy the way he has sang it. ‘Thornbush‘ has a more deeper and emotional effect on the fans. His lower range comes into effect in this song, making it more emotional to listen to.

‘Magic‘ is a fun song to listen to where his higher tone comes in. ‘All the Paths Were Memories If You Look Back‘ is another deep sounding song where you can’t help but slowly groove to it. ‘Graduation‘ is a great way to end the album since it is not a fast or slow paced track. It is medium tempo making it feel like the album is complete.

Meanwhile, this will be his 1st solo album which will be revealed on February 27th. Which track did you like best? Let us know in the comments below!

Tracey Luu
← Previous Story C9BOYZ is coming soon!
Next Story → Argon is the ‘Master Key’ of their group teasers