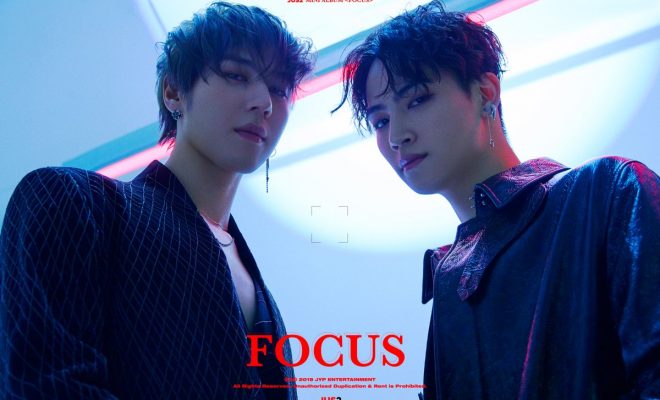 JUS2 wants you to ‘Focus On Me’ in latest track films

JUS2 continues to tease for their upcoming subunit debut with a series of track films. So, check it out below!

They have revealed the track films for all of their tracks. The title track, ‘Focus On Me‘ is the kind of sound that we have expected them to go with. It is sensual to listen to, bringing some kind of relaxation to those who listen.

‘Drunk On You‘ is the next track they drop. It is more slow and has that R&B vibe to it. The voice that stands out in this track is Jb as his voice just move across that melody so nicely. The video ends with Yugyeom‘s voice that ties everything together.

‘Touch‘ has a much deeper sound in comparison to the other two tracks. It fills up our ears with not only the melody but also by their voices. It has this vibe that draws you in and make you stay until the end.

‘Senses‘ is another beautiful sounding song with a beat that captures you immediately. It is upbeat yet has a soft undertone. Because of that, it allows Jb‘s voice to stand out. The way it abruptly ends really leaves you wanting more.

The next track is ‘Love Talk’ which has a unique sound to it. It has the beats overtaking the sounds with the melody sitting right at the back. It doesn’t reveal much on how this song will develop.

The final track is ‘Long Black‘. It also has this intensity that will fit well with their dancing style. It is also the kind of track that will bring chills to those who listen.

Meanwhile, they will make their hot unit debut on March 4th. Which track has caught your attention? Let us know in the comments below!